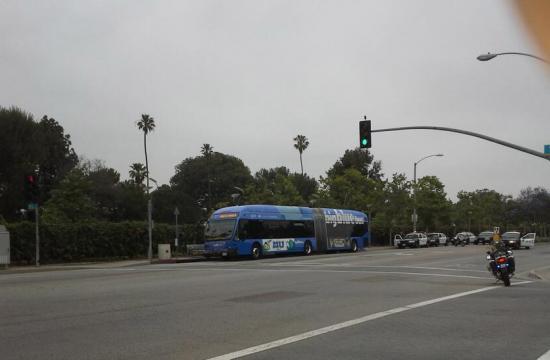 As part of the Santa Monica Police Department’s investigation into the June 7 Santa Monica shooting rampage that left six dead including the shooter, detectives looked into whether suspect John Zawahri conducted a dry run of his route one day earlier.

On the morning of June 6, Santa Monica police searched for a suspected man with a gun who boarded a Big Blue Bus from the City’s eastern limits along Pico Boulevard to Santa Monica College before disappearing.

At approximately 8:30 that morning, SMPD officers responded to the report of a man sitting at a bus stop on Pico and Centinela with what appeared to be a gun in his hand.

“We stopped the bus at 14th Street,” Lewis said. “He had gotten off at 19th Street (the location of SMC), but no one told us, and walked towards the residences. He was never stopped. Everybody on the bus was searched and no weapons were found and it was cleared.”

Lewis said detectives do not believe it was Zawahri.

“It was investigated that day in its entirely and that subject was determined to be a male African American in his mid to late 20s,” Lewis said. “At this point, they don’t believe it was a dry run, but they are aware of it.”

Lewis said the complete investigation could take as long as six months from the day of the event, which he said was the standard amount of time when a case involves an officer related shooting.

“We don’t expect it to take that long, but it is a fairly significant investigation due to the fact that there were multiple crime scenes, a multitude of victims, and a lot of investigative aspects from reports to the suspect – where the weapons were obtained from, there’s an independent investigation that stemmed from that alone. It’s something that will be ongoing for some time and will take a few months to complete.”

When asked if the three officers who neutralized Zawahri – two SMPD officers and one SMC officer – would be recognized with medals for their heroism and tactics employed, Lewis said it was a possibility.

“It’s a type of incident where officers will be looked at for Medals of Valor, but it has to go through a committee and is a long way off,” Lewis said.

Based on the initial investigation, it is known that John Zawahri, the day before his 24th birthday, shot and killed his 55-year-old father Samir Zawahri, and his brother, 24-year-old Christopher Zawahri in their home at 2036 Yorkshire Avenue just before noon on June 7. The house then went up in flames – the cause of the fire is part of the ongoing investigation.

Outside his home, Zawahri shot a 50-year-old woman who tried to intervene while he was carjacking a 41-year-old woman. Once inside the car with the woman, he made her drive him to Pico Boulevard where he shot at cars and a Big Blue Bus, injuring three people. He then forced the driver to take him to SMC.

While on foot, Zawahri then shot and killed 68-year-old Margarita Gomez who was collecting recyclables outside the campus library.

Inside the library, students barricaded themselves into what they hoped were safe places, until two SMPD officers and one SMC officer exchanged fire with Zawahri, killing him at 12:05 pm – just 13 minutes after the shooting rampage began in his home.

Lewis said Zawahri’s rifle, a .223 caliber assault rifle, consisted of what is referred to as an 80 percent lower, which did not have a serial number. The upper assembly also had no markings.

Lewis said all of the .223 magazines recovered were capable of holding 30 rounds – adding these are illegal to possess in California.

“At least one case consisting of 1000 rounds of .223 caliber ammunition was shipped to Zawahri from northern California,” he said. “Detectives are still looking into how he obtained additional ammunition.”

“Detectives recovered evidence that indicates Zawahri obtained various documents and the parts needed to convert the non-firing ‘black powder’ handgun to a serviceable (firing) revolver,” he said. “Detectives also recovered three ‘zip guns’ from Zawahri. These weapons are illegal to possess and appear to have been handmade.”

Lewis said several other replica handguns were also recovered during the search of his room.

He said evidence collected in the investigation indicates that the assault rifle (upper assembly and the 80 percent lower), a number of the magazines and several components to modify both of the firearms were shipped from two locations outside California.

A letter from the Department of Justice dated October 1, 2011 was also located in his bedroom. The letter informed Zawahri that he was not eligible to purchase a firearm.

Lewis said no firearms are registered to Zawahri and based on the investigation thus far, the family does not have any registered firearms. A three page note was recovered from Zawahri’s body by the Los Angeles County Coroner’s Office, but it did not give a motive for his actions, Lewis said.