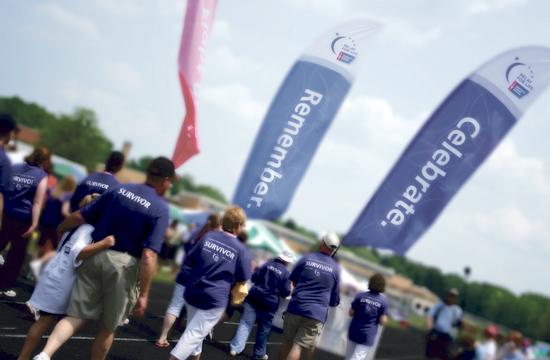 Relay for Life returns to Santa Monica this weekend to raise money for the American Cancer Society.

The goal of the fundraiser is to bring together the community to celebrate the lives of people who have battled cancer, remember loved ones lost, and to show support for the fight back against the disease.

During the event, which starts at 9 am Saturday, teams will camp out and take turns walking or running around the track at Santa Monica College for 24 hours signifying that cancer never sleeps.

Not only is Relay for Life a fundraising effort but it is also a community event. Throughout the 24 hours, there will be live music, free food, yoga, massages for survivors, activities for children and much more.

As the sun sets, a Luminaria ceremony will be held. Candles will be lit inside of personalized bags and placed around the Relay track as glowing tributes to those who’ve been affected by cancer.

Having been established in the mid 1980s, Relay For Life continues to lead the American Cancer Society across the country in its efforts to fight against cancer.

Santa Monica event chair Jake Forsland said there are 28 teams and nearly 200 participants signed up, with more joining every day.

Forsland said a focus of this year’s event was to make a point to invite the public to come out, regardless of whether or not they are officially a part of the event.

“Our hope is that they come out, have a good time, and consider participating the following year,” he said.

• Live music by The Texas Instruments, Owls, Wait for Green, Fernando Fraustro, Luna is Honey, The Vintage Modernists, and many more (Music co-sponsored by All Scene Eye)

Forsland said people can sign up until the day of the event.

“We will also have a registration tent day-of for those who would like to participate and haven’t signed up yet,” he said. “Anyone can also feel free to show up and check out the event throughout the day.”

Forsland said the event hoped to raise $100,000, adding funds are already halfway there.

“All the money we raise goes directly to the American Cancer Society to fund cancer treatment research and various programs to support and provide information and services to those battling cancer,” he said.

Forsland said the event was close to his heart.

“I’ve watched a number of close family members battle cancer; some beat it, some did not,” he said. “In every case, I did what I could, but to a certain extent, I felt powerless. So for me, Relay presents an opportunity to do more than just offer support from the sidelines. The thing about Relay that stands out to me in particular is its scope. It’s an event designed to appeal to anyone and everyone, and the proceeds go towards fighting every type of cancer. This is one of the reasons it’s been such a successful event, not just in Santa Monica, but around the country: it seems like no matter who you talk to, someone has been affected by some kind of cancer in some way.