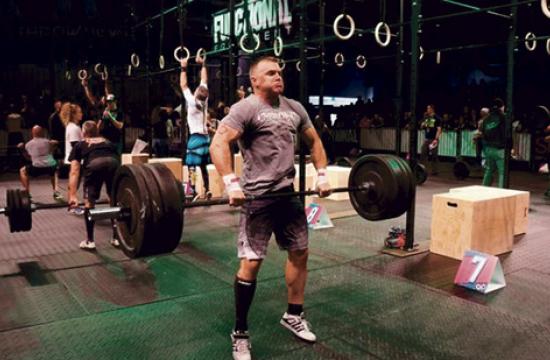 Smiley, 45, competed in the Masters 45-49 Division. He qualified with a 15th-place finish worldwide in this year’s Open.

Here are Smiley’s placings for each of the five sections of the competition. There were a total of 19 competitors in the division, with the final result determined by averages (six competitors were cut after the 4th round and one competitor withdrew after the second round).

“The team starts every training day with a CrossFit workout,” Smiley told the website. “These are either done on the beach of Santa Monica or at a local box in the city … We train all over the Los Angeles area, and have found that the box owners are always more than willing to allow the team to train at their box.”

Smiley told the website he does CrossFit for his team, not the competition.

“My favorite part about both (CrossFit and SWAT) are the team and camaraderie,” he said. “(SWAT) is a mind game. It’s one of those things you can never perfect – you can work towards it. It’s the same with CrossFit.”

Smiley said he trains with men who are much younger than he is.

“I’m trying to keep up with the young guys when it comes to both SWAT and CrossFit,” he said. “They say you should lead from the front. You got to be at least as good. It’s obviously better if you can be the best or near the best.”

Smiley said he did a lot of Olympic and powerlifting in the lead up to the Games.

“I’ve had a positive, ‘Let’s go have a good time’ attitude for as long as I can,” he said. “Just like (with) most competitors, the hardest part is waiting for days before or even an hour before. It’s a lot easier once you’re actually competing. Once you get going, it’s on!”