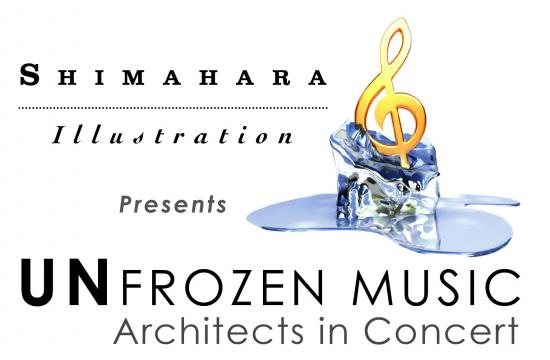 Shimahara Illustration, an architectural illustration and animation studio located in Santa Monica, is hosting its 5th annual Unfrozen Music Concert in October featuring a collection of musicians from the architectural community.

Organizers are currently accepting applications from musicians who work within the architectural industry who would like to perform at the concert.

The concert will be held on a Saturday evening in late October (Date TBD by August 1) at the Santa Monica Library’s Martin Luther King  Jr. Auditorium.

The annual concert series, created by Craig Shimahara of Shimahara Illustration, is named Unfrozen Music in reference to a quote from 19th century German theorist, Johann Wolfgang von Goethe, who said, “Architecture is ‘frozen music’… really there is something in this; the tone of mind produced by architecture approaches the effect of music.”

“Architects are passionate people, and that passion often pours out through multiple channels of expression,” Shimahara said. “After listening to an architect play a violin solo, it’s fun to imagine what kind of buildings he or she might design.”

— Each musician must accompany their performance with an image, images or video that will visually tie together the intersection of music and architecture (AV equipment will be provided)

— Unfrozen Music is a free event open to the public, all musicians who participate will be volunteering their time and talent.

— Each performance should be no longer than 10 minutes including set up and interview time with the MC.

In the submission include:

— A brief bio on as a musician, including the firm and role in the architectural industry

— An audio sample — send either a CD or provide a link to Soundcloud, Youtube, Vimeo etc.

Applicants must send the above information to Celeste Bliven at cbliven@shimahara.net by Monday, Aug. 26. For more information, call 310.450.9612 or visit www.shimahara.net.