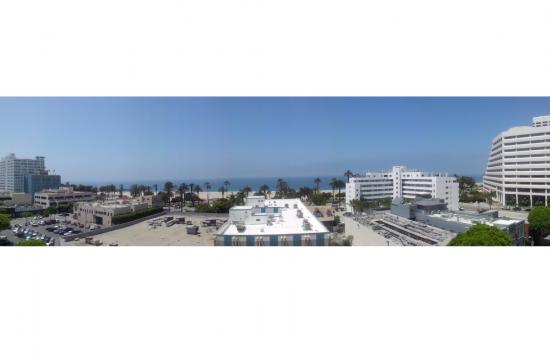 The phrase “hurry up and wait” was certainly the theme of the evening at Santa Monica City Hall earlier this week. A process 18 months in the making, the Downtown Specific Plan (DSP) finally arrived in front of the City Council July 9, only to have deliberation of the key planning document tabled until August because three members of the elected panel were not present at this week’s study session.

With the absence of Council members Gleam Davis, Bob Holbrook, and Kevin McKeown, no substantive action was taken on the DSP. There was no deliberation about placing restrictions on how high new buildings may be built in Santa Monica’s downtown core. A debate wasn’t had about building density.

Instead of a long evening of commentary, deliberation, discussion, and testimony about the future of development along Santa Monica’s urban coastline, one of the most highly anticipated study sessions of 2013, was whittled down to a City staff report and a downsized public comment session.

Council members will revisit the DSP at their Aug. 13 meeting, according to Mayor Pam O’Connor.

Those who spoke Tuesday evening would not be permitted to speak again when the issue returned to the dais Aug. 13.

The focus of this week’s study session was primarily to “review and discuss development concepts and strategies” for the DSP and weigh in on the Program Environmental Report (PEIR) and the California Environmental Quality Act (CEQA) analysis.

Council members were to give input and direction about building height and density parameters for proposed downtown projects as well as eight “opportunity sites.”

When the council finally does get into the gory details of the DSP, they will have to deliberate about whether to modify height restrictions for buildings between 50 to 84 feet high. Another batch of projects to deliberate: whether to limit the eight opportunity sites to 84 feet in height. Finally, council members will have to decide whether any buildings could reach 135 feet in height.

An extension of the Land Use and Circulation Element (LUCE), the DSP aims to integrate public transit with the Civic Center, popular downtown destinations, and local beaches.

“Santa Monica has a successful downtown which is a regional draw for retail and beach patrons and an international, national, and statewide destination for tourists. The DSP intends to preserve the successful existing character, indentify areas where change would be beneficial, and propose options for enhancement that incorporate optimal light rail access,” City staff stated.

Some of those sentiments were raised during the public testimony portion of July 9 study session.

“There seems to be a fear among some residents that new tall buildings will create more traffic,” Scott Schonfeld told Council members. “Smart, transit-oriented development can actually help reduce traffic with circulation improvements like a new freeway off ramp, bike lanes, and public parking at the periphery of the downtown.

Santa Monica Chamber of Commerce CEO/President Laurel Rosen said the Chamber “is not in favor of staff’s recommendations.”

“The DSP … should provide our community with a complete picture of the development opportunities proposed for the downtown region,” Rosen told council members. “The Chamber is recommending that the City study a broader range of development, including all heights.”

Land use attorney Chris Harding said the staff recommendation was not consistent with the LUCE.

“I’m not convinced that the staff recommendation is consistent with the LUCE in terms of the vibrancy of downtown, the tallest buildings, the densest development in the City,” Harding told Council members. “I don’t think that the recommendation for the maximum heights and the densities to be studied matches [the LUCE’s] vision at all. I don’t agree with staff’s comment that what they’re proposing to be studied is essentially the same as what’s in place today.”

There was some sentiment to have a three-dimensional model of how a tall building would alter the City’s skyline and fit in – or not fit in – with Santa Monica’s urban form. The idea of a three-dimensional model was first brought up by Council member Tony Vazquez, who said he wanted to know how a downtown with varying heights and densities would look like in order to properly direct staff or decide on how to move forward.

Some speakers asked Council members to dig for more information before further deliberating the DSP.

Santa Monica resident and 2012 Council candidate Frank Gruber said the current process in place diminishes the city council’s power to make the right decisions. Specifically, Gruber told Council members they need to consider all height possibilities, instead of being told to consider just a few, in order to know which height restrictions work best for the DSP.

“What you really need to do is not look at these as isolated projects but try to figure out what works within the district. We don’t need so much an environmental review in downtown. We need an aesthetic impact report,” Gruber told council members. “You need to look and see what impact all these things will have.”

With the matter delayed for at least one month, the DSP remains in a holding pattern as to providing clarity of how Santa Monica’s downtown will be zoned for future growth.

Stay tuned to The Mirror for additional coverage of the DSP when it returns to the dais Aug. 13.