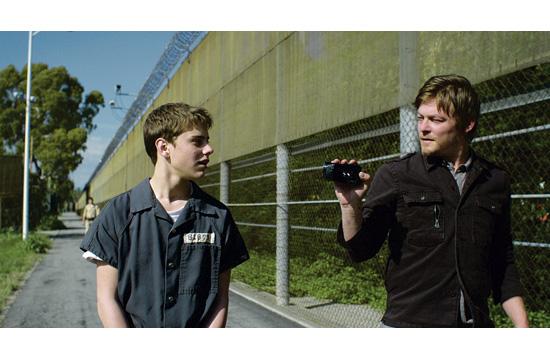 Michelle Danner, Artistic Director at Edgemar Center of the Arts in Santa Monica and one of the most successful Hollywood acting coaches, is now the director of a film that is meant to send a profound message to viewers.

“Hello Herman” provides viewers with an unflinching examination of today’s society through the eyes of a high school killer, Herman Howards (Garrett Backstrom), and the journalist, Lax Morales (Norman Reedus from AMC’s “The Walking Dead”), who sees the tragedy as a potential boost for his own career.

“‘Hello Herman’ is the story of a teenager who, out of confusion and rage, carries out a high school shooting that mirrors the tragedy of Columbine,” Danner said. “In the movie the media only heighten the tragedy by sensationalizing it and setting out to televise his execution.”

Danner said the film began as a stage play by John Buffalo Mailer at the Edgemar Center of the Arts.

“We realized how important and relevant the subject was,” Danner said. “Making a film allowed us to take the message to another level.”

The movie is provocative as it tackles the issue of youth violence.

Danner said that the film invites a much-needed dialogue about not giving up, reaching out, and connecting.

Danner said the objective of the movie was not to provide answers to the issue of youth violence, but rather to start conversations.

“I feel as though the more we adults can talk to kids and raise awareness, the more we can make things better,” Danner said.

Even though the movie is a violent one, there is no blood or gore, because ultimately the message, Danner said, should be about connecting, something she feels society has become desensitized to.

The film, which was released June 7, has had a very positive response.

Danner said that people are responsive to a film that tackles such relevant and provocative issues.

Although many are pleased with the film, there are those who feel the movie is too controversial.

“It has been very controversial in some places,” Danner said. “It has upset people because the movie is saying that our society is the problem. They would like a clean solution, but it’s not that easy. There are many factors that contribute to this problem.”

As provocative and controversial as it may be, Danner felt as though she had an obligation to go through with the film.

After reading Mailer’s script, which was written in response to the Columbine tragedy, Danner knew it was important.

“I had to do this because I have kids myself and I wanted to get this message out,” she said.

Danner’s next project is a family comedy, which is set to shoot in November.

Danner said she prides herself in being able to tackle two completely different subject matters.

“The fact that I can make a family movie immediately after ‘Hello Herman’ makes me glad that I am attracted to that kind of diversity,” she said.

A trailer of the film is available at trailers.apple.com/trailers/independent/helloherman.

To learn more about Michelle Danner or “Hello Herman” visit michelledanner.com or hellohermanthemovie.com.