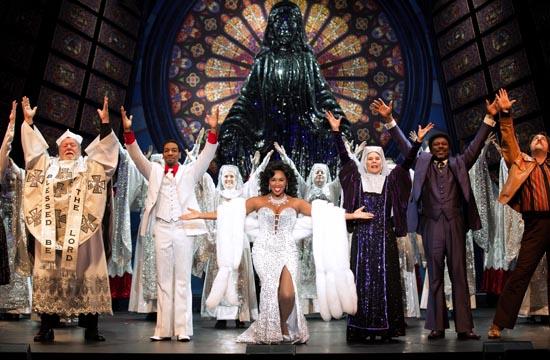 The musical comedy smash “Sister Act” direct from Broadway began performances Tuesday at the Pantages Theatre in Hollywood for a three-week engagement.

When disco diva Deloris Van Cartier (Ta’Rea Campbell – “Book of Mormon,” “Lion King”) witnesses a murder, she is put in protective custody in the one place cops are sure she won’t be found – a convent.

Disguised as a nun, she finds herself at odds with both the rigid lifestyle and an uptight Mother Superior (Hollis Resnik – “Dirty Rotten Scoundrels,” “Les Miserables”).

Using her fabulous disco-ness and killer voice to inspire the choir, Deloris breathes new life into the church, but in doing so blows her cover.

Soon it’s nun-on-the-run time but she finds salvation in the heavenly power of her newly found sisterhood.

The performance schedule is Tuesday through Friday at 8 pm, Saturday at 2 pm and 8 pm, and Sunday at 1 pm and 6:30 pm.

It has a running time of two hours and 45 minutes including intermission and is recommended for ages 8 and up.

Note that in consideration of audiences, no one under age 5 will be admitted to the theatre.