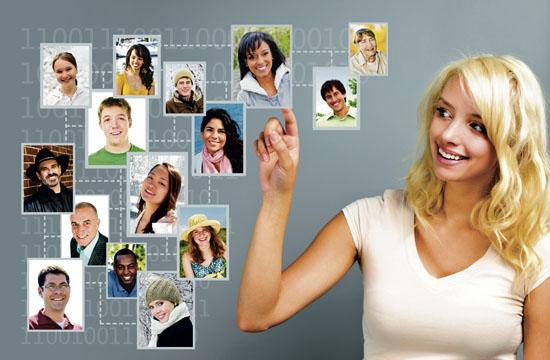 My boyfriend and I have been dating for seven months and he won’t ‘Friend’ me on Facebook! I had explained to him that it’s time for us to take this next step and show the world we are a couple. Shouldn’t he be proud of me and our relationship? Is he hiding something? We are in a committed exclusive relationship so I don’t see why he would want to keep Facebook separate from me. Should I be worried? I’m so confused! – Alexis, 31

I see the confusion. You started seeing this amazing guy. Things are getting serious, intense, emotional, intimate. There’s one pink elephant in the room – he won’t connect with you on Facebook.

Why? You might automatically jump to the conclusion that he’s some cheating, lying, double-life-leading player, but that may not necessarily be the case.

In the midst of your real life relationship with a man you also have your parallel social media relationship forming.

This is a delicate unfolding and combining of both your online and offline lives.

But some men are not willing to make this huge life changing commitment – to become Facebook friends.

Let’s talk about some common reasons he doesn’t want to be your ‘friend’ in the Facebook arena.

He Had A Bad Experience

His ex is cray cray and stalked the last girl he dated. She’s still trying to contact his friends and family members holding on to any shred of connection to him.

This scared the bejesus out of him and makes him want to save himself and you the trouble.

He Sees No Value

Men are motivated by the value in doing something. It’s possible he has no idea how much this official Facebook connection means to you. He doesn’t want the ‘whole world’ knowing his business.

Men are driven by instinct which tells them to make plans and then protect the plan from being found out. Letting it all out on Facebook will feel vulnerable and risky.

Tell him the benefits this would provide for you: a deeper connection to him, more intimacy, a feeling of safety and security for you. Then he might jump at that chance to make you happy.

This could be harmless, or not. Since you aren’t his friend you’ll never know. Some men like the illusion of freedom that Facebook provides. Even if he is officially in a relationship with you, he can still do some harmless flirting via the web and have no guilt or consequences.

Do you get jealous easily? If he sees you as a loose cannon who tends to get irrational, then he won’t give you access to this private part of his life.

He fears you will misunderstand everything and cause fights even if he isn’t acting inappropriately.

Ask yourself – how would you handle it if a girl posted on his wall? Can he trust you to be mature?

He Doesn’t See You Two Lasting

You knew every reason wouldn’t be all roses, so here are the negative things to consider. If he doesn’t think your relationship has a future he will avoid having unnecessary connections with you. It makes the inevitable separation a lot less messy and easier on him.

He Is Seeing Someone Else

Here it is. The reason you were most worried about. It is definitely a possibility, and the reason why most women would be wary of a man who refuses to be open to connecting. It makes you wonder, what the heck is he hiding anyway? If we are in a committed monogamous relationship leading towards marriage, why wouldn’t he want the world to know. Is he ashamed of me? This type of doubt will only breed insecurity and ruin the relationship.

You have to trust your gut. Perhaps it’s too early in the relationship to go Facebook public, or perhaps your relationship is headed for disaster.

There is no way to know for sure, you will have to trust your instincts and intuition. Close your eyes and do a deep breathing meditation and ask yourself how you feel about being excluded in this way.

If you have anxiety or mistrust there might be a very good reason. Your emotions can be your guides to do what is best for you.

Anthea Kerou is a Certified Holistic Health Coach based in Santa Monica specializing in dating coaching. She is available for private coaching sessions, email antheakerou@gmail.com. Alternatively, visit heartfacewellness.com or facebook.com/heartfacewellness for more information.