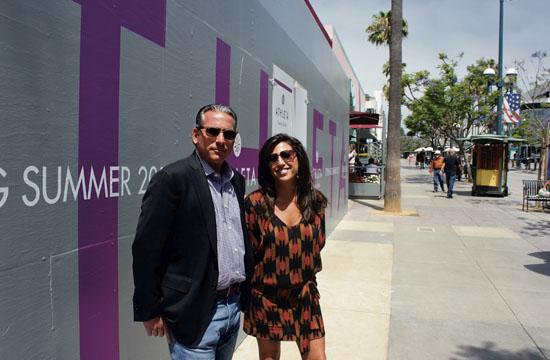 For Robert Cohen and Rachel Rosenberg, the Third Street Promenade is undergoing a resurgence with some retail rents now passing the $300 a square foot benchmark – an amount that far surpasses many high-end streets in Beverly Hills.

The pair head the Southern California office of RKF, a leading urban retail real estate services firm in the country, with more than $20 billion of combined retail leasing and sales transactions.

Both Rosenberg and Cohen are based in Santa Monica and are responsible for not only major retail deal activity on the Promenade and elsewhere, but are involved in the business community of the city.

Cohen is principally known for his knowledge and deal activity in high-street fashion and retail whereas Rosenberg’s expertise is in restaurant strategic development and roll-outs.

Cohen said the Third Street Promenade continues to be a standout location for retailers in Los Angeles.

“It’s one of our best urban markets,” Cohen said. “The Bayside district is filling out, which is great. It’s a trend we are seeing across LA where the peripheral markets are starting to come back. People are reinvesting capital.”

Cohen said there’s a great story to be told for the Promenade where the lion’s share of foot traffic and sales take place.

However, he said redevelopment projects in downtown Santa Monica translate to a lot more potential retail activity near and around the Promenade on 2nd Street, 4th Street, Arizona, Broadway, and Santa Monica Boulevard.

“It’s a very exciting time,” he said. “As the Promenade is only three blocks, most retailers will only look at two blocks – the 1300 block and 1400 block, which creates a lot of upward price pressure. This being said, there are some very good values on the 1200 block.”

Rosenberg said the Promenade has seen a resurgence, particularly in the past 12 months.

“Landlords are aware that the ball is back in their court,” Rosenberg said. “Rent on the 1400 block has surpassed the $300 mark. This is a first for this district. These rents surpass some of the high streets in Beverly Hills.”

Rosenberg said Ocean Avenue has also made a major comeback.

“Ocean Avenue was kind of left for dead for a couple of years,” she said. “Now there are several projects planned which include adding more restaurants, residential units and hotel product, all of which will round out the district.”

The company has also acted as consultants to landlords for renewals.

Cohen helped with the relocation of the Apple store from the 1200 block to the 1400 block of the Promenade.

Cohen said the 1400 block was always a strong block, but Apple’s relocation was a validation of that fact.