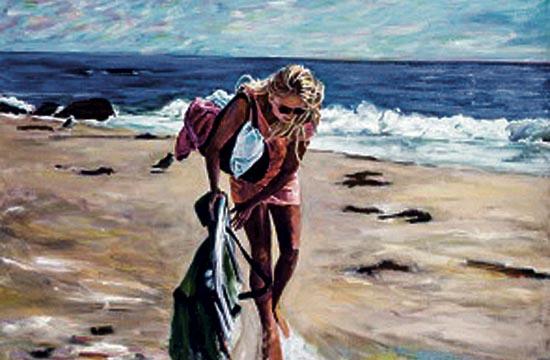 Upper West restaurant at 3321 Pico Boulevard in Santa Monica will host an opening reception for artist Imelda Healy this Sunday, July 14 from 4-7 pm.

The exhibition will feature about 25 paintings from Healy, which will be on display and available to purchase for the next four months.

Healy, an Irish artist from Dublin, arrived in Santa Monica three years ago when her husband was offered a job as a writer on a new HBO show.

She was immediately taken by the light, the beaches, and the life along the Palisades, and began to document it in sketches and paintings in oil, bringing a fresh eye to the subject.

“I consider my work to be contemporary figurative,” Healy said. “I use oil paint to explore the mutability of color, form, and line. I reference traditional subjects like the human figure in landscape. However, my approach is non-traditional as the concept behind the image is important, often suggesting an edgy uncertainty – the fluid nature of time, the eternal in the present.”

Healy holds a B.F.A. with honors from the National College of Art and Design, Ireland’s most prestigious art school, and received the Semantic Award, a major painting prize, at her degree show at the Royal Irish Academy in 2000.

She has a diploma in the History of Art from Trinity College, Dublin, and B.Soc.Sci. from University College Dublin.

She is a founding member of the well-regarded Brunswick Mills Studios in Dublin and recently formed Berkeley Alley Studio in Santa Monica with four other women artists.

Her portrait commissions hang in the National Librar of Ireland, private collectors include Paul McGuinness, the manager of U2; film director Neil Jordan; and Thom and Blythe Mayne among others.

The exhibition is a partnership between Upper West restaurant and local company The Beach Vault.

Upper West is open for lunch from 11:30 am to 3 pm Monday through Friday and open for dinner seven days a week from 5 pm.