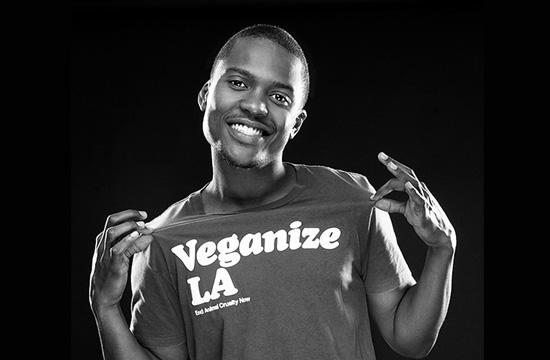 Vegan rapper and animal rights evangelist Vegan Boss will perform this weekend as part of the Fourth Annual Awareness Film Festival, which started Thursday and runs through Sunday, in various venues in Santa Monica.

Vegan Boss will perform Saturday at 9 pm at The Dance Doctor Studio, located at 1440 4th Street, between Magicopolis and the Promenade Playhouse.

Both locations will be screening films for the festival prior to Vegan Boss’ performance.

Vegan Boss said he was excited when festival founder Skye Kelly contacted him to perform, even though he didn’t know much about the festival.

“I did a little research, and was thrilled to find they too were spreading the word about many of the issues I focus on with my music,” Vegan Boss said. “I knew then this would be a great fit. I’m so looking forward to coming out and rocking the house for the 4th Annual Awareness Film Festival this weekend.”

The Awareness Film Festival is a dynamic festival promoting the awareness of world issues.

Bringing together filmmakers, artists, educators, environmentalists, alternative health practitioners, and other industry professionals, the Awareness Film Festival aims to inspire the public through this engaging, entertaining, and unique annual event in the film capital of the world.

The festival, which takes place in various theatres and venues in the Santa Monica area, also prides itself in being a zero-waste and completely vegan festival.

Vegan Boss’ performance comes at the heels of the rapper’s highly successful performances at the Fourth Annual Los Angeles Vegan Beer & Food Festival, held on the famed Sunset Strip, and at the Animal Advocacy Museum in Pasadena.

Vegan Boss said he would be performing tracks from his upcoming album, “Animal” and “Everything is Vegan.”

In addition to the live performance, Vegan Boss will have The Vegan Federation T-shirts available for sale and will be available to meet with fans for photos and outreach.

Vegan Boss said he leads a cruelty-free life and spends a significant amount of his free time in the trenches, fighting for animal rights and trying to raise awareness about the atrocities inflicted upon these animals on a daily basis.

In addition to raising awareness about animal cruelty, he also helps people adopt a healthier way of living, erase the stereotype all vegans are hippies, and bring love back into the hearts of mankind.