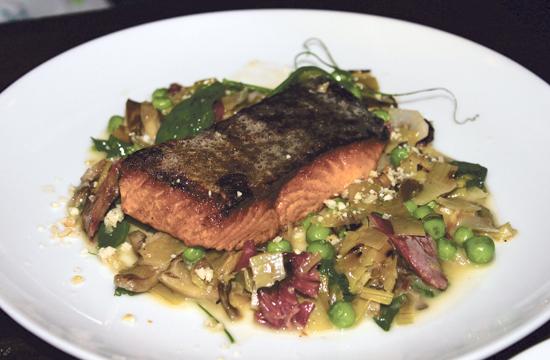 The coastal cuisine of the Southern states is now being served up at Willie Jane – a new seasonal California restaurant on Abbot Kinney Boulevard in Venice that pays homage to the Lowcountry.

The owners of the new venture are Brad and Linda Johnson, who have been serving up classic Southern dishes on their menu at their Baldwin Hills restaurant called Post and Beam.

Brad said he and his Executive Chef Govind Armstrong had discussed the menu for Willie Jane and agreed there was still quite a bit of exploring left to do in the South.

“He’s created a menu that looks at the south through a Californian’s eye,” Brad said. “Also, the restaurant is named after my great aunt Willie Jane, who just turned 100, so many of the dishes take inspiration from the kinds of food she would serve at her home in the South.”

Brad said he was able to secure the location at 1031 Abbot Kinney Blvd as he had a preexisting relationship with both the current and former owners of the property.

“My wife and I have lived on the west side for about 15 years,” he said. “I’ve always loved the space since I first moved to LA and ate here when it was the Caribbean restaurant Mobay and more recently Lilly’s.”

At the heart of the menu is a selection of large-format plates meant for sharing among tables.

It’s a concept that Brad said has been well received.

“The obvious benefit is it allows guests to sample more dishes in one sitting, at the same time it helps to create a communal, fun vibe,” he said. “What’s more neighborly than sharing food?”

Brad said his chef’s creative way of cooking gives guests a balance of what they want from ingredients that are familiar and at the same time preparing them in a way that makes the end product something that could never be done at home.

“I love the fried chicken served over these incredible Anson Mills grits from South Carolina,” he said. “I’m also crazy about the new burger on the bar menu with fried green tomatoes and house made ketchup.”

Willie Jane also serves up some fantastic cocktails – like the Coalminer’s Daughter with bourbon and macerated ginger while the bar’s Old Fashioned, Sazerac, and Vieux Carré allow for authentic renditions of the iconic libations.

Chef Govind is also growing some herbs and vegetables in master gardener Geri Miller’s new garden located right next door to the restaurant, which are featured on the menu.

For reservations or more information, call 310.392.2425 or visit williejane.com.