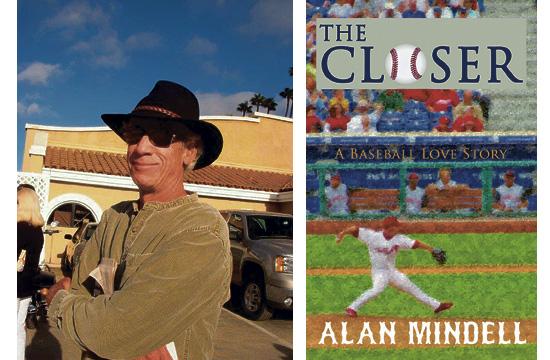 Santa Monica resident and published author Alan Mindell believes his life has just begun at the age of 72. He recently released a sports fiction novel called “The Closer,” which has been met with positive reviews.

It’s this success that Mindell has been waiting for since his writing career first started in his 20s.

Mindell said he was not only able to find a publisher after 12 years, but he has also found his book on the top of Amazon.com’s newly released sports fiction paperback list.

His book tells the story of a minor league baseball knuckleball pitcher, Terry Landers, who gets a chance in the major leagues.

“This story is a baseball story and a love story,” Mindell said. “It tells the story of a family in distress and a search for meaning. ‘The Closer’ becomes a symbol for someone who deals with life in a positive way.”

Mindell’s hope is that after reading his book, readers will take away meaning beyond baseball and beyond a love story.

He said his aim was to write a baseball story that had depth to it.

“My main character without knowing it, is actually seeking meaning to his life,” Mindell said. “After struggling for quite some time, Terry gets an opportunity for change that translates into both baseball success and love success.”

Mindell said the publishing process was a grueling one.

After finishing a draft of “The Closer,” Mindell made the decision to discontinue his writing until he sold something.

“I decided to focus on selling,” he said. “I queried agents and I queried publishers directly and I got two positives.”

Mindell said his tactic in pitching his story to publishers was to appeal to real baseball players who mirror his fictional character, Terry.

After finishing a draft of the book, Mindell decided to put it aside for a bit because it was not selling at the time.

After R.A. Dickey had his success, however, Mindell decided it was time to focus on selling it.

“R.A. Dickey, who is the first knuckleball player to ever win the Cy Young Award, is the player my character is based on,” Mindell said. “I used this as a lead in as Dickey was having a great year, which was very timely.”

After rewriting and updating his work in a three-month period, Mindell began the process of editing and proofing his work.

Shortly after getting positive responses from publishing companies, Mindell was approached by a major New York literary agent.

Mindell decided to turn down the offer to work with this agent.

“I did not want to delay the process and try to get the best possible book deal,” he said.

Although the book is not geared to any specific demographic, Mindell is curious to see to whom the book appeals, as it is both a baseball story and a love story.

“I want to see if the combination of baseball and love story detracts or adds to the novel’s appeal,” he said.

The combination of sports and love is a seemingly successful one, as the book has been doing exceedingly well. “I did not anticipate this success,” Mindell said. “My goal was just to get published, but I have far exceeded that goal.”

Currently, Mindell is finalizing a screenplay for “The Closer.”

He also plans on writing a sequel to his book.

“I’m intending to write a sequel to ‘The Closer’ because I’m hooked on it and I can’t just let these characters go,” Mindell said. “When the book ends the characters’ lives are in flux, so I want to continue this story.”

Mindell said that at age 72, he has been having the time of his life since the release of his book.

“The success of this book has been an incredible surprise, and I’m absolutely thrilled,” he said.

“The Closer” can be ordered online at amazon.com or from the publisher at sunburypress.com.