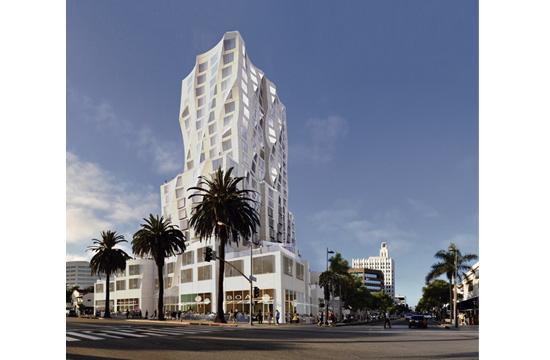 On the heels of the Downtown Specific Plan (DSP) that’s set to dominate the City Council’s agenda Tuesday evening, members of the Architectural Review Board (ARB) met with world-renowned architect and Santa Monica resident Frank Gehry on Wednesday to discuss design plans of a future art deco hotel to one of the city’s busiest intersections.

While building heights and opportunity sites will be the crux of the DSP discussion at next week’s council meeting, the ARB focused on how the proposed 22-story hotel, which would be built and designed by Gehry Partners, M. David Paul Associates, and Worthe Real Estate Group, would look like.

Some basic statistics: the not-yet-named project, which is currently referred to as Ocean Avenue Project, would include a 125-room hotel, rent-controlled apartments, affordable housing units, 22 condominium units, and ground-floor restaurant and retail space.

The three-building design would include a museum campus, public access rooftop observation deck, and three levels of subterranean parking with 460 spaces.

The two existing landmark-designated buildings on the development site would remain there and be incorporated into the project.

“Ocean Avenue Project” would be located at 101 Santa Monica Boulevard, on the northeast corner of Ocean Avenue.

City senior planner and project manager Roxanne Tanemori said the project would be in front of planning commissioners and the City Council as a float up later this year before finally being put to an official vote at some point in 2014.

For the time being, the ARB focused on the project’s proposed design plans.

Gehry spent a few moments sharing his perspectives to the ARB members about the project’s possible design.

His comments seemed to indicate a lot of work remains to be done.

“I realize some of the issues here aren’t trivial and need to be considered seriously. I want to do something special,” Gehry told ARB members.

Explaining the building’s design, Gehry explained his motivation to avoid the look and feel of some of the buildings north of Santa Monica Boulevard and Ocean Avenue.

“I just look at the block between Wilshire and Arizona, those three buildings, you can’t see through them,” Gehry said. “If you look at (this) proposal, it’s pretty porous and open and tries to make a sculptural relationship with the other buildings surrounding it.”

He added the ground-floor retail is “not yet ready for prime time” but his team is going through numerous models to come up with the best possible plans.

Speaking of plans, a member of the Gehry Partners team illustrated how the proposed high-rise hotel could look like if completed.

The building’s height, which, as proposed, would top off at 244 feet, was certainly a point of discussion for ARB members.

The proposed height exceeds the 135-feet height restriction proposed in the DSP and is much higher than most of the buildings within a stone’s throw of Santa Monica Boulevard and Ocean Avenue.

At a community meeting earlier this year, many residents expressed concern about the building’s proposed height.

One member said the building is not really that tall by conventional standards and the designers did a good job with massing and controlling how the tower’s shadow would dominate the surrounding area.

Another board member hailed Gehry as a “hometown hero architect” and said he see the building as Santa Monica’s Rockefeller Center.

The choice to make the building’s color white was also well-received.

ARB members hoped the developers would make the pedestrian experience a high priority, helping make the Ocean Avenue Project a key tourist attraction for the City.

The developers began work on the Ocean Avenue Project in 2008, when the Land Use and Circulation Element (LUCE) was still being developed and a few years before the DSP was actively a part of the public process.

Other Southern California projects designed by Gehry include the Walt Disney Concert Hall and various buildings of the Loyola Law School campus in downtown Los Angeles, the Cabrillo Marine Aquarium in San Pedro, the Hollywood Regional Library, and Anaheim Ice.

In Santa Monica, Gehry designed the Edgemar retail complex, Santa Monica Place, and his own residence. There are four locations in Malibu and Venice that are also designed by Gehry.