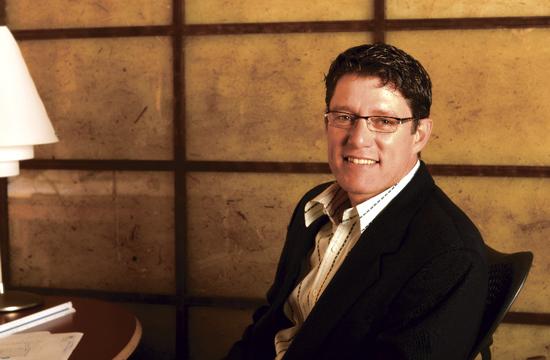 As the designer behind two of Santa Monica’s newest dining establishments – Del Frisco’s Grille and Redwood Grille – architect Stephen Jones says attention to detail is the key to creating the perfect restaurant, spa, or hotel.

In 1996, Jones established his Marina del Rey-based design company SFJones Architects, which has been responsible for creating dynamic environments for dining, relaxation, and pleasure.

In designing the two Santa Monica restaurants, Del Frisco’s Grille at 1551 Ocean Avenue, and Redwood Grille at Santa Monica Place, Jones said he was able to maintain the two distinct visions of each client while still infusing each venue with some of his signature features.

“Del Frisco’s Grille wanted to be colorful and wanted a bar energy,” Jones said. “Redwood Grille was different in that the idea was to have it more subdued and sexy and elegant.”

Jones said he was able to achieve the vision of each restaurant, while still adding his own personal flair.

“When working with clients, I let my own style take a back seat,” he said. “I like deep saturated colors and interesting material on display.”

For Del Frisco’s, Jones said he added some rustic features with light fixtures. For Redwood Grille, he added material and his own design features.

While holding to the integrity of the design and simultaneously adhering to city codes can create certain challenges in the design process, Jones seems to think these challenges can be positive.

“A lot of these challenges are what make an interesting design,” he said. “Things that may seem like a blow to the design, I can turn it around and make something special.”

Jones said he began pursuing his architectural career from a young age.

Knowing architecture was an interest he wanted to pursue early on in his life, Jones set out to formally study architecture at the University of Florida.

After graduating, he moved to Boston to work with Jung/Brannen Associates, where he designed high-rises.

Shortly after, he moved to California to pursue a Masters Degree in architecture from UCLA.

It was during his time in California working at a small boutique firm that he realized how much he enjoyed the attention to detail he was able to put into his work.

“I immediately fell in love with the type of projects I worked on with the small boutique firm that designed restaurants,” Jones said. “The attention to detail was something I didn’t experience working with a large firm. It was this experience working on social spaces that got me in the direction that I’m in.”

Jones describes the venues he designs as social spaces.

“I primarily design social spaces, such as restaurants or spas,” he said. “The thing that all these places have in common is that they are all equipment intensive.”

For Jones, this means that the work he does is all-inclusive and holistic.

When Jones takes on a project, he designs everything from the lighting and furnishing to the exhaust systems and equipment.

In designing these types of places, Jones’ ability to hone in on intricate detail has proved useful.

Jones explained that designing a restaurant, for example, requires attention to detail and the knowledge of how a restaurant functions.

“I’m always looking for flow and function, because it has to run at top speed,” Jones said. “You have to think about the flow of the restaurant in terms of where the hostess and servers stand or where the food comes out.”