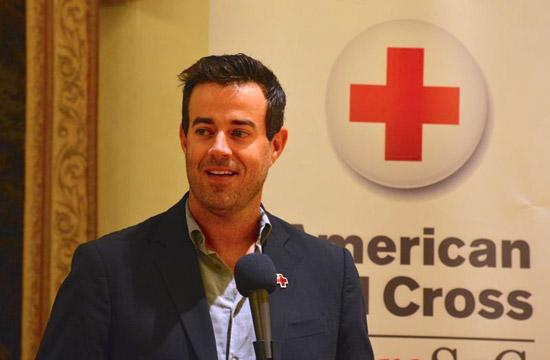 TV and radio personality Carson Daly (who is a Santa Monica resident) has been named honorary chair of PrepareSantaMonica, partnering with the American Red Cross to introduce the three-year catastrophic disaster preparedness campaign.

Daly, host and executive producer of NBC’s “Last Call with Carson Daly” and “The Voice,” and 97.1 Amp Radio personality, made his first appearance as Chair of PrepareSantaMonica when he addressed key local civic and business leaders at a reception last week at Santa Monica Lexus to kick off the campaign.

“Are we prepared? No. Should we be? Yes, and we’re going to be as a result of the PrepareSantaMonica campaign,” Daly said.

With support from individuals, organizations, businesses, and government agencies, the goal of PrepareSantaMonica is to create more resilient communities that are better equipped to help prevent, prepare for and respond to life-threatening disasters.

As a Santa Monica native, Daly chose to support these efforts because he has been through several earthquakes and witnessed first-hand the destruction an earthquake causes.

“My dad lost his shop in Santa Monica as a result of the Northridge earthquake,” said Daly, who also experienced personal tragedy on September 11, and he urged community members to plan for all types of disaster.

The offices of the American Red Cross of Santa Monica are reopening after some much needed renovations this Monday, Aug. 5.

The offices have been closed since May for remodeling and refreshing.

The newly refurbished offices, which are located at 1450 11th Street in Santa Monica, will have a fresh new look, more room for volunteers and a self-service computer station to sign up to donate blood, make a contribution, or sign up for a preparedness, health, or safety class. Its office hours will be 8:30 am to 5 pm Monday through Friday.