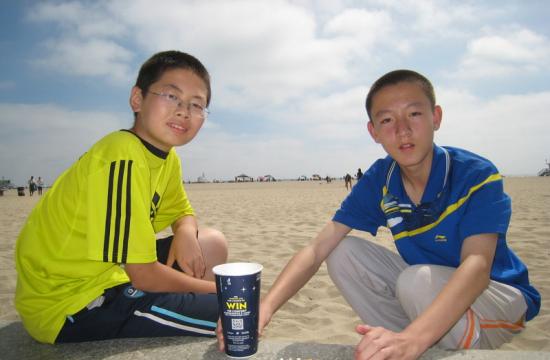 In total, 1,922 butts were counted and collected from the three study sites.

Kay said based the students’ data, the group can definitively identify a ‘community ashtray’ – the one meter wide strip of sand adjacent to the boardwalk, especially between the Casa Del Mar Hotel and the Santa Monica Pier.

“There were also notable hotspots of residential cigarette pollution, like 229 Bicknell Avenue,” Kay said. “Like many complexes, this condominium building is smoke-free, so residents appear to smoke in front of the building where there are no permanent trash cans or cigarette receptacles. Thus, there is a great opportunity for the city to respond with strategic placement of litter abatement devices, which would greatly reduce cigarette butts that end in the ocean.”

The beach boardwalk study site, specifically along the boardwalk-sand interface between the Santa Monica Pier and Ocean Park Blvd, contained the highest abundance of butts with an average of one butt found every two square meters.

The residential study site, specifically along the sidewalk-street interface of Bay Street, Bicknell Avenue, and Pacific Street between 3rd Street and Main Street, possessed slightly fewer butts with an average of one butt found every three square meters.

The sandy beach site between Bay Street and Hollister Avenue had a comparatively small abundance with an average of one butt found every 13 square meters, although hidden cigarettes buried in the sand were not included in visual surveys.

Breaking the boardwalk data down by zone revealed that cigarette butt abundance is three to four times higher closer to the Santa Monica Pier than in zones further from the pier, likely a result of more people/foot-traffic in this zone.

Furthermore, in all three zones, the one meter strip of sand bordering the concrete boardwalk contained five to eight times more butts than the equivalent spatial area of boardwalk itself, with average abundance as high as one butt per square meter of sand.

Closer examination of the residential data revealed that streets of similar length possessed highly varied cigarette butt abundance, with Bicknell Avenue leading as most polluted, possibly due to the presence of more multi-unit complexes.

Butt abundance on Bicknell Avenue was higher in the one meter strip of street bordering the curb compared to the same surface area of sidewalk/parkway.

Conversely, Bay Street had more butts on the sidewalk/parkway than in the street.

Breaking the data up per residence, the multi-unit building at 229 Bicknell Ave was the record polluter with 77 butts, 97 percent of which were found in the street within one meter of the curb.

Corner residences that merge with Main Street had the next highest abundances ranging from 17 to 46 butts per property.

Other student projects, which focused on plankton, shore birds, and sand crabs, were led by Samohi teacher Ingo Gaida and marine scientist and Get Inspired Inc. founder, Nancy Caruso.

Students presented their research to all program participants and SMMUSD school board member, Ben Allen.

Splash into Science’s three teacher team was contracted by Sunny International Exchange Inc., which establishes and facilitates youth study abroad and professional development programs between China and the US.