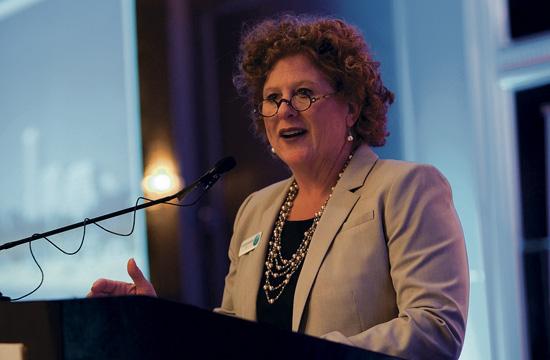 The key themes of the meeting included a celebration of Santa Monica’s history and a look forward to where the City is headed.

Mayor Pam O’Connor kicked off the meeting with a 30-second video message.

DTSM CEO Kathleen Rawson boasted the City’s rich history and quoted Winston Churchill in saying “the farther back you can look, the farther forward you are likely to see.”

A slideshow narrated Santa Monica’s history, from the day a pair of investors bought some land near Palisades Park and to the revitalization of the Third Street Promenade into a successful destination.

A large amount of that budget is dedicated to the Ambassador Program, she said.

Of course, Rawson did not shy away from acknowledging downtown Santa Monica’s pitfalls, including parking, vehicular access, and circulation.

Speaking of parking, Rawson boasted a new, larger Parking Structure 6 is almost complete, meaning there will be more available spaces for vehicles.

She was also proud of the reinvestment into the City’s urban core, including the revitalization of Santa Monica Place.

“The downtown is the economic engine of the City,” Gould said.

“Some call the Third Street Promenade as Santa Monica’s living room,” he added.

Other key topics included circulation and the arrival of the Expo Light Rail Line, the addition of new parks near City Hall, the replacement of the Pier Bridge, upgrading the California Incline, parking supply, and various upgrades and reinvestments in and around downtown.

Downtown’s walkability was another point of pride for the City Manager.

Gould also talked about bringing a new movie theater to the downtown.