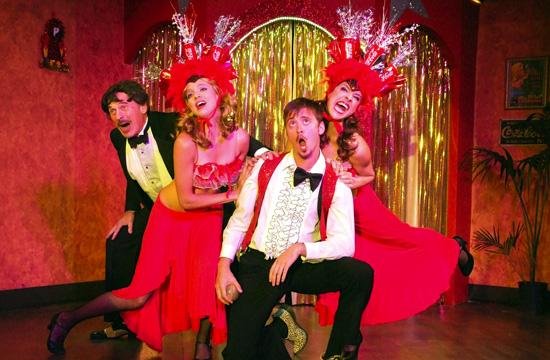 If it’s time to entertain your inner child* – you might want to hop on your tricycle and pedal as fast as you can over the Ruskin Group Theatre for 90 minutes of non-stop silliness brought to you by “El Grande de Coca-Cola,” currently on stage at that hotbed of theatrical activity.

Produced by Michael Myers and written by Ron House, Diz White, Alan Shearman, and John Neville-Andrews, this revival, originally performed almost 40 years ago in London, is reminiscent of the good old days of slapstick comedy in the Laurel & Hardy, Buster Keaton, The Three Stooges, The Marx Brothers, and Charlie Chaplin tradition.

Staged most effectively by Alan Shearman on an outrageously wonderful glitzy set designed by Cliff Wagner, and equally glitzy costumes by Sarah Figoten Wilson, the shenanigans take place in a cabaret somewhere in Mexico, and begin with Cousuelo Hernandez, a tall, beautiful young leggy lady, hilariously played by Lila Dupree, talking directly to members of the audience.

She holds a tray with cups of Coca-Cola similar to the kind of trays cigarette girls of yesteryear used to carry and kibitzes with the women and is seductive with one of the men, eating his very own cookie. Of course, she has a Spanish accent and executes stage business to perfection.

Enter now Señor Don Pepe Hernandez, played with maximum hilarity by Ron House who originated the role all those many years ago.

He wears an ill-fitting wig with a little gray curl in the front, and speaks in a combination of broken Spanish with enough English words thrown in so that you always know what he’s saying.

He prides himself in being “Señor Show Business” and had promised the audience a star-studded evening or “Parada de las Estrellas” (Parade of the Stars).

However, unable to make good with that promise, he commandeers family members, who are devoid of any talent, to fill in for the missing headliners. And, so the comic escapades begin resulting in non-stop havoc.

Award-winning Director Shearman has assembled a most talented ensemble, each of who expertly executes the various segments in which they fracture the action.

David Lago as Miguel Vasquez plays the piano with a musical range from hip hop to opera and participates in many of the sketches as does Nina Brissey as Maria Hernandez, the other tall, leggy, beautiful young woman who effectively messes up everything she tries.  Aaron Jackson as Juan Rodriguez plays the drums and like the rest of the “family,” tries his best to efficiently execute the various sketches.

Jackson is a younger version of Jim Carey and his rubber face will leave you in stitches as he plunders his way through a messed up Tango with Cousuelo or plays “Blind Joe Jackson” where he holds a string-less guitar and facing away from the audience sings, “I Caught My Baby in Bed With Another Man,” ultimately walking into a wall.

In another skit, he walks a tight rope, which is actually on the ground.

With sketches galore and never a dull moment, some include a “transparent” magic act, performed by Miguel and Maria, a skewed shooting demonstration, and a commercial for Coca-Cola.

It’s difficult to pick out the funniest moment, but if one had to, it would be the sketch with the entire ensemble doing an instant replay in slow motion of a wedding ceremony.

Kudos to Tor Campbell’s cockeyed choreography but remember, you must be a highly skilled actor before you can satirize something and this ensemble certainly accomplishes that in a grand gesture of decimating all attempts at being “trained professionals.”

House as Señor Hernandez keeps the mayhem flowing at a brisk pace bantering with the audience in between sketches in his combination of broken Spanish and English.  Remember, although the entire evening’s dialogue is in Spanish, you don’t have to speak or understand that language to get the full rib-tickling impact of the evening’s action which moves at breakneck speed, barely giving you enough time to catch your breath before the next wild piece hits you right in your laughter button.

*The fun-loving, silly part of you that you had when you were a child.  If it’s dormant, this could wake it up.