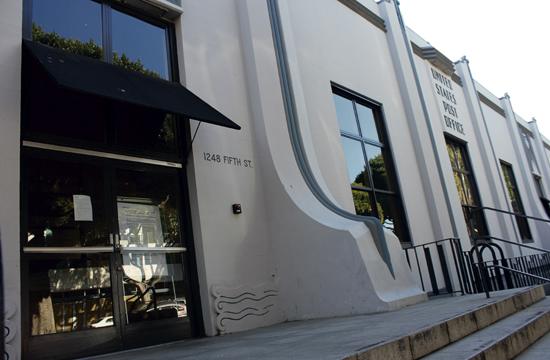 Santa Monica City Hall and Washington, D.C., are expected to face off against one another in 2015 to determine the fate of Santa Monica Airport (SMO). On a much smaller scale, Santa Monica is preparing to deal with the federal government regarding another piece of government-owned property within city limits: the Post Office.

After the Post Office on Fifth Street shut down June 29 at the direction of the U.S. Postal Service, city officials are looking for ways to preserve the building at 1248 Fifth Street in the downtown core.

When council members meet Tuesday, they will be voting on a “preservation covenant” in order to protect the former Post Office’s structure and allow it to gain historic status.

According to City staff, the former Post Office “is eligible for listing in the National Register of Historic Places.”

However, the building must have certain proprietary restrictions in place prior to the Postal Service potentially designating the Post Office building on Fifth Street as a historic structure.

If approved next week, the proposed covenant would, according to City staff, “prohibit the purchaser of the property, as well as all future owners of the property, from undertaking any construction, alteration or rehabilitation on the property that would affect the historic features of the property without first seeking review and approval from the certified local government.”

Another layer of public review could be added if the building is also landmarked.

“It is apparently the sole process that can be used at this time to preserve the Post Office because federal supremacy effectively precludes municipal regulation of federal property,” City staff stated in its report to the council. “Thus, the City lacks jurisdiction to landmark the Post Office while it is federally owned. Once the property is privately owned it will be subject to local regulations, including the City’s Landmark Ordinance.”

The covenant proposed by City staff designates certain features to be preserved, including “the mass and plan of the main façade, the poured concrete siding, the wood frame windows, the ornate groves in exterior walls, pilasters, columns, exterior motifs and the ornamental metal fence.”

Inside, the building’s original hanging light fixtures would possibly be protected, as well as the “marble wainscoting, horizontal wood walls and ceilings, metal staircase rails, and tall tables.”

Without the proposed covenant attached to the building, the Postal Service could sell it to a private party who, in turn, could tear down the former Post Office and potentially develop another structure on site.

However, if the council approves the proposed covenant, City staff states “the Postal Service may proceed with the sale of the property with the covenant attached to the grant deed transferring the property to private ownership.”

The Postal Service made a similar arrangement with the City of Los Angeles to preserve the Venice Post Office.

In light of its ongoing “fiscal crisis,” the Postal Service “exercised its authority to close and sell the Downtown Post Office,” with the lights going out June 29.

City officials put up a fight to keep the Post Office open but were unsuccessful. Since, City Hall has been working with federal officials “to maximize protection for the structure through the mechanism of a preservation covenant.”

The process to keep the Post Office on Fifth Street open picked up steam about one year ago, when council members voted at its Aug. 14, 2012, meeting to oppose the closure and sale of the mailing facility.

Council members will be voting on the proposed covenant during the “Staff Administrative Items” portion of the agenda during the Aug. 27 meeting.