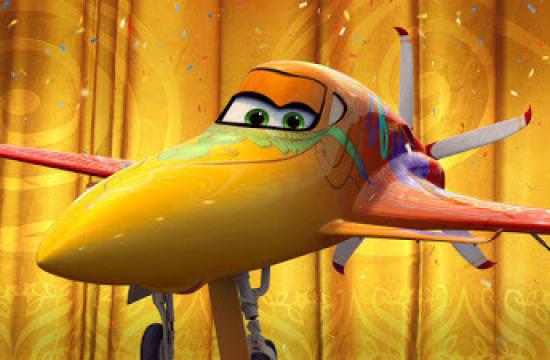 Select members of the cast and film crew descended upon the Museum of Flying at Santa Monica Airport to chat about “Planes,” which opened nationwide in theaters Aug. 9.

The Mirror caught up with Chopra, one of the film’s voices, a Bollywood star making her first starring appearance in a Hollywood production.

Parimal M. Rohit: Since your character is plane, let us start with the obvious question: are you afraid of flying or heights?

Priyanka Chopra: No! I used to be afraid of heights. Then I went skydiving and bungee jumping. Within a week, I got over my fear.

PMR: Okay. Now tell us about Ishani. How is she like you? How are you like her?

She is like me. She has an amazing propeller and so do I. (Laughs). There is a really cute line in the movie where Ishani turns around and she walks away and Dusty looks at her and says, “Wow, look at her propeller.” That was me, that line was me.

Ishani, she is this confident, tough chic who is amazing at what she does. She’s a champion plane from Asia. She’s in a race which is all boys and she’s confident about herself. She’s a lot like me: she’s spunky, she’s fun, she’s sexy. I really wanted Ishani to be a lot like me, and I hope that’s happened.

PMR: Planes is a very children-friendly film. What kind of message do you expect children to take away from your character? Just the same, what, to you, is the film’s overall message?

PMR: What was the challenge for you in doing a voice-over character, where you are in a studio all day and there is no set to go to or actors to interact?

We do a lot of dubbing in Indian movies, so I am used to that, but I wasn’t used to not having a reference. When you dub a movie, you have the scene you already shot, so you know what you have to do, but this was just going into the booth and creating [Ishani].

PMR: So looking ahead now, you are starring in Planes, you have a musical track with Pit Bull; you have a lot going on for you. What is the next big foray for you in being an international star?

I feel like the world is my oyster and I can do anything. I’ve always lived my life and my career like that. I don’t plan my life. When an opportunity comes my way, I give it my 100 percent and I like doing things which are different. I don’t like walking on a path which has been walked on. I want to be able to create my own path. What’s the fun if you don’t get to experiment and do different things.

PMR: Let’s finish with this: what is your favorite Disney film of all-time?

Ahh, man, I have so many favorite Disney movies. The Lion King is one of my favorites. Also Cinderella.

“Planes” released Aug. 9 in the United States and can be seen in 3D at select theaters.