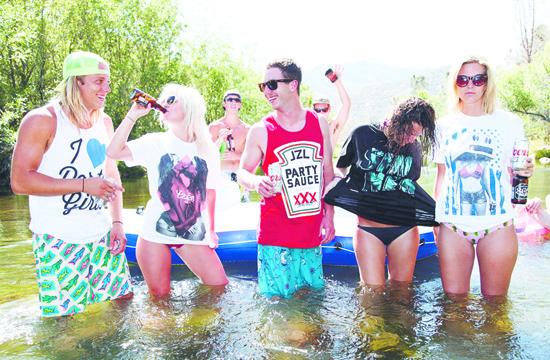 Photographer/artist James Thompson, CEO of his own art brand JZL, will debut his most recent works at Bergamot Station this Thursday evening.

Thompson’s art is known to exude confidence, power, and a culture of oneness, while treading carefully the border between sexy and vulgar.

His work will come to life as models from his most iconic pieces strut the showroom and greet guests against the backdrop of pulsing music from DJ Sunset Groove.

Thompson was able to bring all the components of his art together under his brand, JZL. Founded in 2011, JZL is committed to inspiring young people to live unbound through apparel, photography, and art.

Thompson considers himself an artist and a graphic designer, but primarily a photographer.

He began developing JZL shortly after graduating from Loyola Marymount University, where he received a B.A. in graphic design.

His photo artwork, which will be heavily displayed at the Aug. 22 event, consists of him photographing women in fun situations.

“I started working on JZL after I graduated,” he said. “I decided I needed to way to bring all my artwork together into a brand, which is now JZL.”

Thompson explained that much of his work is influenced by his time spent in Hawaii and Europe. He wanted to create a brand that reflects his travels and inspires people all over the world to live a Southern California lifestyle.

“JZL is about living life, traveling, girls, and having fun,” Thompson said.

He also said that JZL was a result of his obsession with photography and his true love of art.

After being attracted to electronic music during high school and college, he decided to have his artwork reflect the vibrant beats of his favorite DJs.

Thompson’s art as well his brand, are geared to a young demographic.

“My art is very edgy and I’m hoping it will be the next big thing,” Thompson said. “My art is done in the right way, without being trashy.”

Thompson’s upcoming art show and launch party will be hosted by Nicole Muyingo and will feature music by Sunset Groove.

“The event will not be a typical art show, there will be different exciting things, which will make it a different experience for people who are used to going to art shows,” Thompson said.

Although the show is set to feature a variety of pieces in different media, the entire show, Thompson said, is focused around his photography.

“The art show will display a combination of things,” he said. “The show will feature apparel from the JZL line, there will be frame prints, and then there will be some paintings of pictures as well as multimedia pieces.”

The art show and launch party will be held from 7-11 pm at 2525 Michigan Avenue, Santa Monica.

Much of Thompson’s art can be viewed by following his Instagram account, jzl_style. For more information, visit jzlstyle.com.