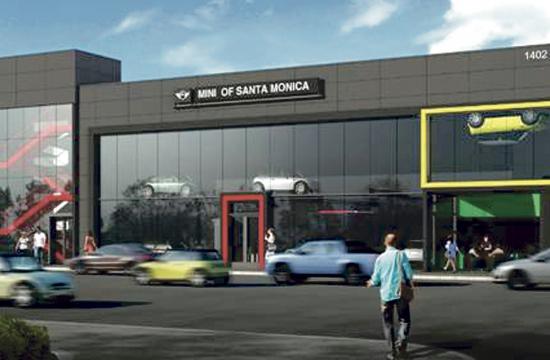 Last week, council members discussed the prospects of bringing the first-ever MINI dealership to Santa Monica. If plans were ultimately approved, the dealership would be built in place of a 76 gas station at 1402 Santa Monica Boulevard.

Though a development agreement (DA) is not yet in place, Steve Quinn and his Quinn Automotive Group hopes to eventually bring the dealership to Mid City.

“The project involves construction of a two-story building that would include up to 33,750 square feet of floor area for a Floor Area Ratio (FAR) of 1.5 … and approximately 131 parking spaces within a 19-foot-deep one-level subterranean parking level and an at-grade customer parking area containing 18 parking spaces,” City staff stated.

If built, the project would occupy three contiguous parcels and cover 22,500 square feet.

“We’re not a developer. We don’t come into a city and look to lease property or to come in quickly and build a business, then sell that business,” Quinn told council members. “We have purchased this property … because we are here for the duration.”

Quinn added the largest concentration of MINI-Coopers in North America could be found in the Santa Monica-Malibu-West Los Angeles region, estimating about 5,000 vehicles in the area are MINI.

A community meeting was held before the float-up came to the council. According to city planner Russell Bunim, community benefits were not specifically raised at the meeting. However, the proposed café, overall design, the prospect of test-drives through residential neighborhoods, and the dark color of the proposed building were discussed.

Though City staff has not yet addressed the test drive issue, Council member Kevin McKeown said how the issue is resolved is key to his consideration of the proposed project.

Quinn told the council the dealership will not allow residential test drives and will submit a plan to reflect such a plan.

Three people sent emails to the City planning office to express their respective opinions about the prospects of a MINI dealership coming to the corner of 14th Street and Santa Monica Boulevard.

Linda Liberman expressed her displeasure with the proposed project, stating “there are way too many dealerships in this area.” She added she hoped to instead see more restaurants and shops come to the corner of 14th and Santa Monica to make the area more walkable.

Kristi Foster, who said she lives three blocks away from the proposed project, was concerned about noise pollution.

“I think the well being of residents in this neighborhood would be further at risk of unnecessary noise pollution should the proposed project include automobile repair facilities,” she wrote.

David Shamolian, who owns a building at 1417 14th Street, wrote an email to City planning stating he looks “forward to discussing in further detail” about the proposed project.

During the public testimony portion of the float-up, one Mid-City resident said she was excited to see the dealership include plans for a café.

Should a DA be entered into, City Hall would seek a few community benefits from the Quinn Automotive Group, including local hiring, LEED Certification, widening the sidewalk along Santa Monica Boulevard, and creating a Transportation Demand Management (TDM) to reduce single-occupant vehicle trips.

Council member Bob Holbrook said it is only fitting to have a MINI dealership in Santa Monica since so many people in the area drive the branded vehicle.

Meanwhile, McKeown said he hoped the Quinn Automotive Dealership would make every effort to fit within the community and seek more than a LEED Silver certification.

Council member Ted Winterer thought the café could bring some pedestrian vibrancy to an otherwise “bleak stretch of Santa Monica Boulevard.” He also pondered if the dealership would consider some sort of after hours shared parking plan.

The four council members present accepted the float-up and will look at the dealerships plans again at the next phase of the public process.