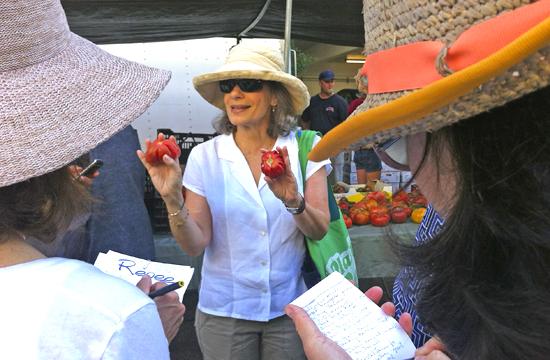 Whether you’re new to the Santa Monica farmers’ markets or a market regular, Amelia Saltsman can open your eyes and show you more of what your farmers’ market has to offer.

A writer, cookbook author, and longtime farmers’ market champion, Saltsman has been shopping the Wednesday downtown Santa Monica market long enough to see the farmers’ children and grandchildren grow up to become farmers themselves.

She wrote “The Santa Monica Farmers’ Market Cookbook” and is a frequent guest on the weekly Good Food show on local NPR radio station KCRW.

She says she’s been giving private tours for her friends and decided to open up her tours to the public. Her first public tour was on July 17, and The Mirror was invited to come along.

The group of 11 people gathered at 9 am at the market’s heart, the busy intersection of 2nd Street and Arizona.

From there, Saltsman led the group on a beeline to the first stop, Wong’s Farm from the Coachella Valley, hurrying so the group won’t miss out on the Valencia Pride desert mangoes that usually sell out by 9 am.

These mangos are extraordinary, she says, available for only a very short period, and if they’re sold out you must sign up on the list for next week’s haul.

Saltsman points out the day’s other market highlights, including the fact it’s the last day for Blenheim apricots from See Canyon.

She points out it’s the first day here for a new stand, The Garden Of…, a Santa Ynez farm that’s known for great lettuce.

“Today they’ve brought corn – the old fashioned corn of your childhood, with real corn flavor,” she says. “I’m excited about seeing yellow corn, because we’re seeing too much corn that’s just plain sweet, corn that’s grown to be just sweet. No, you want complex flavor. When you cook with ingredients that have complex flavor, it’ll be really easy.”

She shows the group her favorite farmers and some of her favorite produce, like Jerry Rutiz’s Chantenay carrots and Coastal Farms’ tomatoes.

She also gives her views on organic farming, and the differences between the many farmers’ markets in town.

With each stop her excitement grows even more contagious. She tells the group to rely on their own senses – “Look! Touch! Smell!” – as their guide, try samples, and get to know the farmers.

“The whole point of the farmers’ market is having direct interaction with the farmers,” she says.

She says farmers can grow for different factors like long storage life, shippability, sugar content, and uniform size. Some farmers grow for flavor first, and those are the ones to look for at the farmers’ market.

Amelia Saltsman’s next Wednesday downtown Santa Monica Farmers’ Market tour will be on Wednesday, Aug. 21. Admission is $45 per person and groups are kept small.