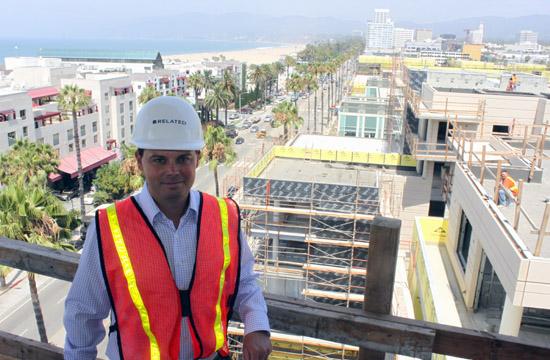 In about six months, the first residents are expected to move into Ocean Avenue South – one of Santa Monica’s largest developments currently under construction just one block from the beach.

The 3.7-acre site sits between Colorado Avenue and Pico Boulevard on Ocean Avenue – between Viceroy Santa Monica and the new Tongva Park that’s scheduled to open in September.

The development offers two mixed-use residential properties with a total of 158 residences, including 11 penthouses.

Ocean Avenue South comprises The Waverly at 1705 Ocean Avenue, which consists of 65 residences in east and west buildings that rise six stories high connected by a fifth-floor skybridge lounge that overlooks the six-acre Tongva Park.

Meanwhile, The Seychelle at 1755 Ocean has 93 residences in a 10 story high building.

The developer behind the project is Related Companies, which has completed other projects such as The Century (luxury condominium tower in Century City) and New York City’s mixed-use Time Warner Center in Manhattan.

As part of Related’s development agreement with the City of Santa Monica, there are also 160 apartments under construction where rent will be subsidized for middle-income tenants chosen through a lottery and a screening process. This will be conducted by Related in the fall.

Gino Canori, senior vice president of Related California, invited The Mirror on a tour of the sales and information center (which opened mid-July) and the construction site.

“We are about six months away from releasing the first phase of the project,” Canori said. “The first phase of completion will include 100 percent of the affordable housing units and The Waverly condominium residences – that’s all built on one common parking structure. The second phase will come two months later, which is The Seychelle.”

Canori said prices would be released in the fall when the residences go on the market.

The ground levels of The Waverly and The Seychelle will be home to five upscale restaurant outlets across nearly 20,000 square feet.

Canori remained tight-lipped on the names of the outlets saying at least one celebrity chef was attached to one of the restaurants, but said details would be announced in fall.

Canori said Related competed for the site when the City of Santa Monica published a request for qualifications in 2005.

He said Related and a handful of other development companies were then selected to submit a proposal for the redevelopment of the area.

He said Related was chosen out of that group to enter into an exclusive negotiating contract with the City in 2007 to hammer out details of the development.

“We had complete site control by 2008,” Canori said. “We were continuing down the road and then the financial crisis hit. We were about ready to start construction, but we put the project on hiatus and waited for everything to calm down. We made a conscious decision to restart the project in early 2010.”

He said utility relocation began on the site in fall 2011 and financing for the project closed in December 2011.

The development will also feature public walkways offering direct access between Main Street and Ocean Avenue as well as to the adjacent Tongva Park. Olympic Boulevard will also be extended to Ocean Avenue.

Among the luxury components of the project, The Seychelle residents will enjoy an attended lobby with doorman and concierge, a residents-only rooftop with a pool, Jacuzzi, furnished cabanas and sun deck accompanied by an entertainment lounge with a stone fireplace, kitchen, and barbeque area.

Additional amenities include a business center, pet spa, and separate landscaped terrace with a fitness center and yoga studio.

Residents of The Waverly will also have an attended lobby with concierge, access to the private Skybridge Lounge that offers a gourmet kitchen, fireplace, and viewing deck with barbeque, a state-of-the-art fitness center, and pet spa.

For more information on the project, visit www.oceanavenuesouth.com.