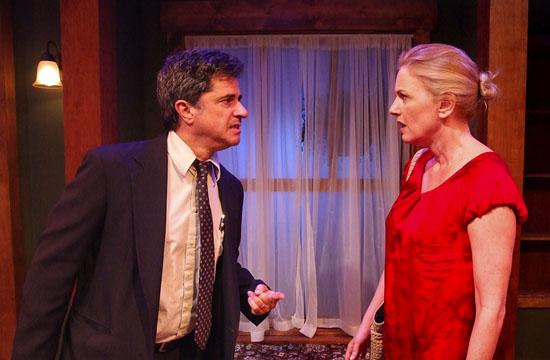 As a devotee of Equity Waiver theatre, one is always reluctant to be too negative as some of the most innovative work emanates from small theatres like Ron Sossi’s Odyssey Theatre and the Skylight Theatre Company, where award-winning playwright Shem Bitterman’s “Open House” is currently on stage. There’s always a hit and there’s always a miss and unfortunately Bitterman’s world premiere production is more a miss than a hit, but with potential for the latter.

The story line appears to be about a real estate salesman trying to sell a property. He is well dressed and seems to be quite efficient.

In the “hit” category is Robert Cicchini as Chuck Baker. This highly skilled actor gives one of the most compelling performances you’re apt to see on any stage, anywhere and fully services the spotty narrative.

At rise, he is on stage and for a long time he silently executes a series of tasks to pass the time away – reading a newspaper, drinking coffee, doing a crossword puzzle, listening to a football game or a motivational tape, or napping on the window seat.

He is waiting and we do get a glimpse into the life of a real estate salesman in an open house situation where there are long periods of being alone and bored and Cicchini captures that magnificently.

In the “miss” category, one would have to take to task either the playwright or the director, Steve Zuckerman, for the overuse of what could have been an effective theatrical device.

To illustrate the passage of time, the stage lights go black and when they come up again, Cicchini is in a different pose or different part of the stage executing another piece of stage business.

While this worked for let’s say the first five or 10 or 15 times, it became overused and lost its effectiveness – much like using too much spice which can overwhelm a delicate flavor.

Finally, in what is an almost an interminable amount of time without dialogue, a potential buyer appears by the name of Martha, played by Eve Gordon who does a credible job mining through the sometimes puzzling narrative which seems to lack character transitions and motivation for some of the bizarre behavior she exhibits during the course of the play such as having sex with a wall.

Where did that come from and why did she return time after time after being adamant that the house did not suit her because it had a bad “vibe”?

Is that the director? Is that a flaw in the material?  Is that the actor not understanding the subtext?  Is there a subtext?

Faced with what we see as desperation, Chuck is hell-bent on closing this sale at any cost and goes into his fast-talking salesman pitch to convince a very reluctant Martha that the house is perfect for her, trying to overcome her objections to the size of the property and the fact that it only has one bathroom. And so it goes for 90 minutes.

Not to throw out the baby with the bath water, it should be noted that some of Chuck’s speeches, as written by Bitterman, are pure poetry and quite riveting.  The same can be said for Martha’s ending emotional monologue, which Gordon delivers beautifully in one of her most believable moments when she finds out she’s been swindled and the unexpected, shocking denouement that follows.

On the “hit” side, the interior of the house set by Jeff McLaughlin is quite elaborate as his wonderful lighting design which truly captures the changing light pattern throughout the day and evening.

On the “miss” side, there is no costume credit, which is probably why Martha shows up wearing summer clothes when the action is actually set during the Christmas holiday where temperatures are usually in the mid-60s range.

It’s okay to be theatrically obtuse as in the Theatre of the Absurd, but too many questions go unanswered in “Open House” which really does have theatrical potential.

Run: Fridays and Saturdays at 8 pm