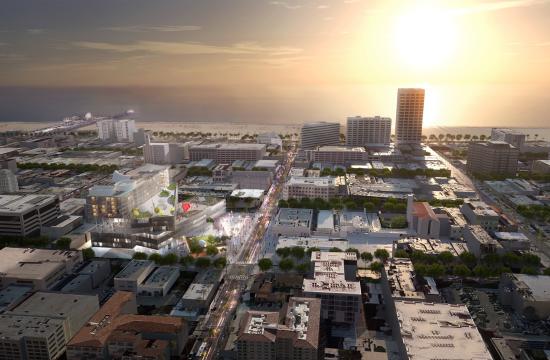 Rem Koolhaas is not a household name in Santa Monica, but that is about to change. Koolhaas, a Pritzker Architecture Prize Laureate (think Best Picture/Best Director/Best Actor/Oscar) is the lead architect for the design of the public/private project at the 4th/5th and Arizona Street site.

Thomas J. Pritzker, President of the Pritzker Foundation said Koolhaas has been called “a prophet of a new modern architecture.”

The Koolhaas firm, OMA, has built projects all over the world. In the United States OMA may be most widely known for the design of the Main Library in downtown Seattle.

When the Koolhaas firm OMA was given the commission for the Main Library in Seattle the City was warned that they needed to “brace for a wild ride with a man famous for straying outside the bounds of convention.”

While it is true that the library is not conventional it is also true that it is a beloved public destination in the heart of downtown Seattle.

It is a beautifully conceived and executed space comfortably accommodating and welcoming large numbers of library users of all ages and an exemplar of green design.

Looking at OMA’s conceptual proposal for the Santa Monica site we see how this proposal is specific to Santa Monica.

The open and porous building is designed to capture ocean breezes, offer spectacular views, express sustainable architectural principles, meet practical requirements such as parking and provide for restaurants and shops and housing at various income levels and more. The popular ice rink is included within a grand outdoor activity area designed to be programmed for markets and concerts and dinners and festivals and performances. Koolhaas and his partner at OMA, Shohei Shigematsu, don’t live here but one gets the idea they know the City.

Santa Monica is in the midst of yet another building boom period.

Under all the discussion and argument is the constant theme of how Civic identity is defined and protected.

It seems Koolhaas is offering a way to both build the City and to keep faith with the existing character of the City.

The building’s design expresses Santa Monica’s spirit of creativity, the high standards the City sets for itself in sustainability, and the identity of a City as an easy and fun place to live.

That doesn’t mean there won’t be discussion and argument. The current proposal is conceptual. One where the scale is human and understandable even though the building proposed is the 12 stories currently being discussed in a City-wide reassessment instead of the previously allowed six.

“OMA was chosen,” said John Warfel of the development company Metropolitan Pacific Capital (MPC), “because we knew we needed to have a great piece of architecture. The site deserves it and it will be welcomed in Santa Monica. It couldn’t be just good, it had to be great and it had to be done right.”

MPC and it’s partner, Clarett West, will be before the Council at the Aug. 27 meeting to seek approval to enter into exclusive negotiations for development of the 2.5 acre parcel which is currently the site of the Ice Rink, Bank of America, Chase Bank, and Carlson’s.

City of Santa Monica Director of Housing and Economic Development Andy Agle said the City purchased these properties starting in the early 2000’s with the idea that the City needed ancillary parking and other amenities to support the Downtown.

“Soon after the properties were purchased we began the Community Visioning Process to set goals for the development of the properties,” Agle said.

Agle said there was a consensus that the winter ice rink had to stay.

“We needed to meet public objectives for a very active public use of the site,” he said. “We needed to provide substantial public parking.”

Agle said the City purchased these properties with Redevelopment Funds.

“Even though the State has now ended Redevelopment funding, previous contracts continue to be honored,” he said. “The City will own the land and the developer will build and run the project.”

The estimated move-in date is scheduled for 2018.

In the meantime, there will be an ongoing public process.

This City is changing. In fact all cities change over time, for better or for worse.

It is up to Santa Monicans to make sure that the coming changes will continue to make Santa Monica an interesting, compelling and fun place to live.

Santa Monica City Hall displays signs boasting, “We Do the Right Thing Right.” They are setting standards for their work and asking for public feedback. That same motto could be applied to the Koolhaas proposal. The OMA submittal to the City offers Santa Monica an opportunity to do the right thing right.

Great architecture needs a great client. Koolhaas has made the offer. Now it’s up to the City.