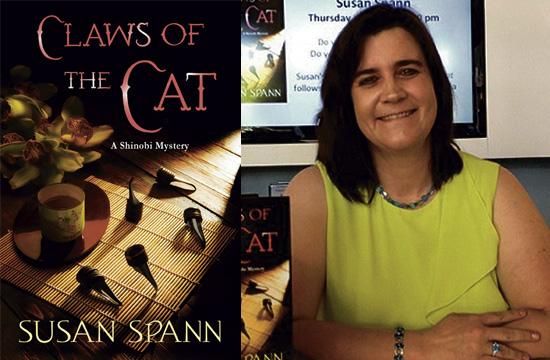 Santa Monica native Susan Spann has taken the literary world by storm with her debut crime fiction novel, “Claws of the Cat: A Shinobi Mystery.”

Spann’s novel is not just a crime story, but rather a fast paced mystery set against the backdrop of a medieval Japanese landscape, that delivers rich detail on Japanese culture and history.

Even though “Claws of the Cat,” which will be part of a three part series scheduled for release at a later date, is her first published manuscript, Spann has been writing fiction since she was a child.

Spann, who has worked as a publishing attorney since 1997, said she had been writing all the while since then.

“I’ve self identified as a writer since I was young,” she said. “I have been writing since kindergarten and I wrote my first full length fantasy novel in high school, and then I continued writing in college and law school.”

Spann attended Tufts University in Boston where she found herself engrossed in the study of Chinese and Japanese history and culture.

This intrigue led Spann to pursue an undergraduate degree in Asian Studies. This very same fascination with Japanese culture and history has made its way into her debut novel. Spann’s mystery story is one that transports readers back in time to 16th century Japan.

“Claws of the Cat” tells the story of a ninja detective.

When a samurai is brutally murdered in a Kyoto teahouse, master ninja Hiro has no desire to get involved. But the beautiful entertainer accused of the crime enlists the help of Father Mateo, leaving the master shinobi with just three days to find the killer in order to save the girl and the priest from execution.

The investigation plunges Hiro and Father Mateo into the dangerous waters of Kyoto’s floating world, where they learn that everyone from the elusive teahouse owner to the dead man’s dishonored brother has a motive to keep the samurai’s death a mystery.

Spann said this is the first work of mystery she has written.

“Before this book, my previous manuscripts were historical fiction,” she said. “Once I made the switch to mystery, I realized that mystery is what I was supposed to be writing.”

She said the process to get her manuscript published was a relatively quick one.

“I pitched the story to my agent in September of 2011 and she read it signed me as a client in October and then put the book out on submission in January,” Spann said. “I was surprised because it usually takes six months to a year to sell a project, but this one sold very quickly.”

For Spann, the impetus behind the book was as she describes it, a ninja attack.

“I was standing in my bathroom getting ready for work and all of the sudden had an idea: most ninjas commit murder, but Hiro Hattori solves them,” she said. “The idea of a ninja who was a detective, rather than a killer, was just fascinating to me.”

After having this revelation, Spann knew this was a book she had to write.

Aside from its action packed plot, the novel focuses on different aspects of Japanese culture in the Samurai era.

“One of the things I hope readers will take away is the way in which the series focuses on different facets of Medieval Japanese culture,” Spann said.

Although she was confident in her book, Spann understands how hard the industry can be.

“I’ve been very pleased with the response,” Spann said. “I’ve gotten a lot of positive feedback. I didn’t anticipate this success because it’s impossible to tell what people will think before it happens.”

Book two of the mystery series is already in production and is set to debut in July 2014, while book three is scheduled for release in summer 2015.

“Claws of the Cat” is available in hardback and eBook formats at all national and independent booksellers, as well as online at amazon.com or from the publisher at macmillan.com.