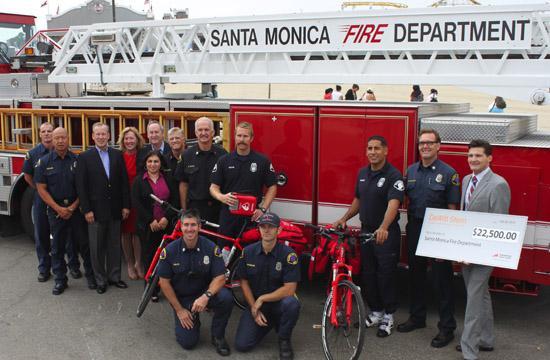 An insurance company and a risk management firm have teamed up to give the Santa Monica Fire Department (SMFD) money to pay for fully equipped bikes to handle medical emergencies at crowded events like the LA Marathon and Twilight Concert Series.

With the help of DeWitt Stern and Fireman’s Fund Insurance Co., the SMFD has received $22,500 in grant money to help support a bike medic program, it was announced this week.

Members of the SMFD joined executives from DeWitt Stern and Fireman’s Fund Insurance Co. in the parking lot just north of the Santa Monica Pier on Tuesday morning, where the check was presented and accepted.

Such equipment and preparation would help first responders respond to emergencies, large crowds, and special events.

“It’s critical that our firefighters have the tools and training to provide the best service possible to the community,” SMFD Captain Michael McElvaney said. “We are extremely thankful for this grant. This truly enables us to provide an increased level of service to the community and our visitors.”

“We are honored to support the Santa Monica Fire Department in such a meaningful way, knowing so many people will ultimately benefit from this program,” DeWitt Stern’s John Hamby said.

Bike medic teams have been launched in several cities, municipalities, and towns across the United States.

In Santa Monica, bike medics are valuable in large-scale events such as the Los Angeles Marathon, which had its finish line at Palisades Park in recent years, and Fourth of July festivities. Bike medics also come in handy in servicing the pier during large events or emergencies.

In the event of an earthquake or tsunami, bike medics could be deployed to assist areas where larger vehicles may not be able to gain access.

According to the International Police Mountain Bike Association (IPMBA), the uses of bicycling for public safety gained momentum in the 1980s. Initially a popular technique employed by colleges and universities, the Indianapolis Fire Department had a “bike team” in place in 1989. Two years later, the Denver Health Paramedic followed suit with a bike team of its own.

Bike medics “quickly proved to be an effective means of overcoming the crowds and traffic that inhibit timely response to medical emergencies,” IPMBA executive director Maureen Becker said in a report she penned in 2008 about the history of EMS cycling.

“The application of EMS cyclists has continued to increase, and EMS services now deploy bikes in tourist areas, during special events, in amusement parks and sports arenas, on college campuses, and in airports, train stations, and other transportation hubs.”