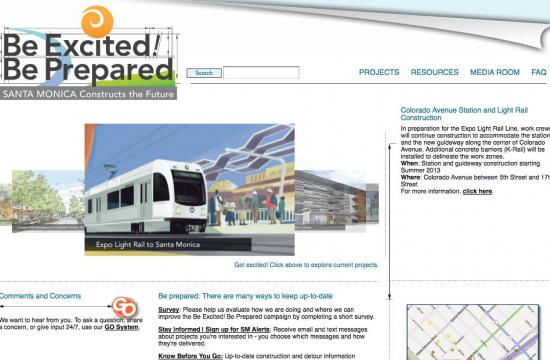 The City announced Wednesday it had been recognized by the Public Technology Institute as a leader in the strategic and innovative application of Web 2.0 technologies and civic/social media tools.

Santa Monica is one of nine city, county, and state governments nationwide to achieve this recognition based on impressive results in citizen engagement, government accountability and operational efficiencies.

“People expect to engage their governments using mobile devices and social media tools,” said Chief Information Officer Jory Wolf. “This award recognizes the success we have had in anticipating and meeting this demand.”

In granting the recognition, PTI made special note of the transparency provided by the City’s Be Excited! Be Prepared website at smgov.net/bebp.

The site provides a comprehensive view of major construction projects and traffic impacts so that residents, visitors, and businesses may plan accordingly.

Created by in-house developers, a number of best-of-breed technologies are strategically combined to deliver a cohesive product.

The mobile version incorporates GPS to display projects in the current vicinity of a user.

Created by and for cities and counties, the not-for-profit Public Technology Institute promotes innovation and collaboration for thought-leaders in government, and advances the use of technology to improve the management and delivery of services to the citizen.