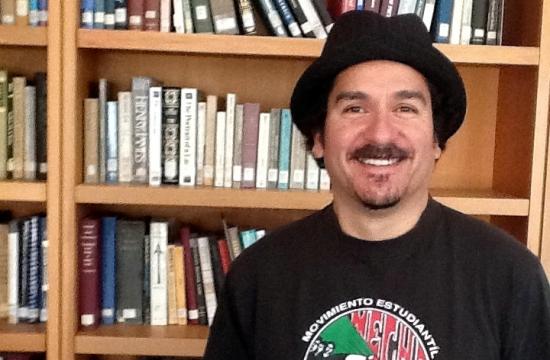 Santa Monica resident and UC Riverside graduate student Elias Serna knew he had become a collector of books the day his mother told him, “Ya no compres tantos libros” (“Don’t buy any more books”).

Persistence and a love of books and other materials documenting the Chicano Movement paid off.

Serna’s collection of nearly four dozen books — many of them rare or hard to find — pamphlets, art catalogs and films has won first prize in the Antiquarian Booksellers’ Association of America’s National Collegiate Book Collecting Contest.

He will receive the $2,500 prize in an awards ceremony Oct. 18 at the Library of Congress in Washington, D.C. UCR Libraries will receive a $1,000 prize.

Serna, a Ph.D. candidate in English, is the first UCR student to win the national contest.

“UC Riverside is honored that one of our own has won the ABAA’s National Collegiate Book Collecting Contest,” said Steven Mandeville-Gamble, university librarian. “Elias Serna demonstrated an insightful and keen collecting focus as he built his personal book collection chronicling scholarship on the Chicano/Chicana movement.”

Serna’s collection previously won first place in the UC Riverside Adam Repán Petko Student Book Collection Competition. Winners of local competitions for undergraduate and graduate students advance to the national contest, which is administered by the Antiquarian Booksellers’ Association of America (ABAA), the Fellowship of American Bibliophilic Societies, the Center for the Book, and the Rare Books and Special Collections Division of the Library of Congress, with major support from the Jay I. Kislak Foundation.

The UCR Libraries competition is named in honor of Adam Repán Petko (1896-1995), who immigrated to the United States in 1912.

His son, Dr. Edward Petko, funded the contest to honor the memory of his father by providing an opportunity for undergraduate and graduate students at UCR to display their talents in assembling and organizing a personal book collection.

“We are delighted that Elias has won first prize, particularly as it comes on the 10th anniversary of the Petko competition at UC Riverside,” said Melissa Conway, head of Special Collections & Archives of the UCR Libraries. Conway established the annual contest in 2003 after many conversations with Dr. Petko, himself the winner of the undergraduate prize at UCLA in the 1950s.

Judges of the national competition called the collection “a reflection of how a political movement awoke a cultural awareness. Protest morphed into theater, posters, poetry, literature and art. Serna himself founded the comedy group Chicano Secret Service. His deep commitment to his roots obviously has driven his collecting, but his well-tuned collector’s sensibility has informed his selection of essential texts and rare ephemera key to this important movement.”

“The poems, posters, manifestos, films, broadsides, and rare books in his collection do not always find their way into traditional libraries, and without them a rich diversity of voices and perspectives can be lost to history,” she said. “Scholars of Chicana/o studies, historians, literary critics, poets, journalists, activists, and everyday readers will be grateful for Elias’ collection.  Elias’s work enriches us all and I’m delighted that he has been honored with this award.”

Serna, who grew up in the Pico neighborhood of Santa Monica, expects to complete his Ph.D. in spring 2014.

He holds a B.A. in Chicano studies from UC Berkeley and an M.F.A. from UCLA, and taught Chicano studies at California State University, Northridge for seven years before enrolling in the Ph.D. program at UCR.

His dissertation, currently titled “Composing a Chican@ Rhetorical Tradition: Decolonial Polemics of the Past, Present, and Future,” examines Tiburcio Vasquez’ photographs and letters from jail in the 1870s, feminist journalism from the Mexican anarchist group Partido Liberal Mexicano (PLM) in Los Angeles at the turn of the 20th century, and polemics from the Chicano Movement of the 1970s, especially the plans to create Chicano studies departments.

These books are among Serna’s favorite titles in his collection.

“The legacy of the Chicano civil rights movement, especially the student and arts movements, has been a key inspiration and moral guide, and the texts that this early movement produced have been my ‘holy books’ and documents that continue to inspire my work,” he explained.

Serna said he has admired learned people and has wanted to build a personal library for as long as he can remember.

“The ancient peoples in Andalusia revered being ‘people of the book,’ and the ancient people of the Americas were the same until their books were burned,” he explained. “I think this is relevant to what’s going on in Arizona and the destruction of the high school Mexican-American studies departments there.”