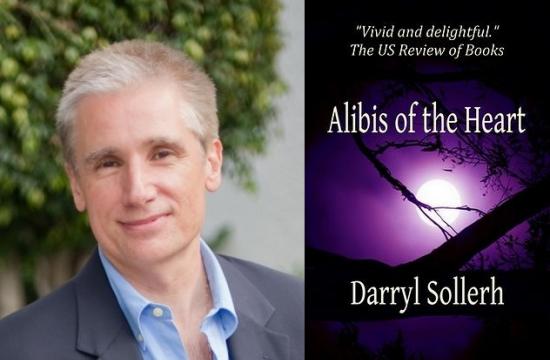 Santa Monica writer Darryl Sollerh — whose novellas published this year have garnered him First Horizon, Hoffer Award Finalist honors, as well as two Readers’ Favorite Book Award Finalist honors — will this week debut his latest, entitled “Alibis of the Heart”, marking his sixth novella to be released in the past eight months.

Sollerh’s debut novella, “SHaDOW GAME”, released this past January, is both a First Horizon Award Finalist (Hoffer Literary Awards), and a 2013 Readers’ FavoriteBook Award Finalist, and has been described by the Pacific Book Review as “Riveting. Author Darryl Sollerh has created a dramatic fiction about violence…It takes some brilliance in writing for an author to bring together these worlds and make them work in a way that offers up a Buddhist lesson on the soul of a man…You don’t want to put it down!”

His most recent novella, “Alibis of the Heart”, a southern murder-mystery-romance, is about a suddenly divorced, big-city lawyer named Will, who heads south to lick his wounds and write the great American crime novel, only to meet Jasmine, a beguiling waitress with a murky past, whose late night, black-humored tales of Gothic mayhem and coldblooded murder in Okefenokee swamp draws Will inexorably into her hazardous world.

Raised in Los Angeles, Sollerh grew up with a deep appreciation for its diverse communities and cultures, including Santa Monica and its beaches.

Since moving to Santa Monica 15 years ago, he has become a regular contributor to the Huffington Post and The Santa Monica Mirror.

He has taught literature at Crossroads School for the Arts and Sciences in Santa Monica, and his short stories and articles have appeared online and in literary collections, including Angel’s Flight.

He has also recently co-authored two, well-received parenting guides with Crossroads School counselor Leslie King, LCSW, based on their years of working with students of all ages and their families, entitled “Stop Yelling, Start Listening – Understanding Your Middle School Child”, and “How To The Loving, Wise Parent You Want To Be… Even With Your Teenager!” as part of their “The Dancing Parent” online articles.

All his books and guides are now available in print, as well as on Kindle, iPad, Nook, and eReaders.

Today he lives with his wife and intrepid, adopted son, enjoying the Santa Monica’s sunsets that for Sollerh will always glow with childhood memories.

For more on Darryl Sollerh and his books and guides, visit http://www.DarrylSollerh.com.