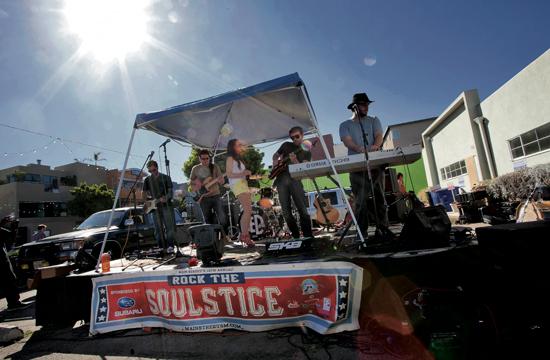 Main Street’s annual Endless Summer SOULstice event will return to Santa Monica this weekend. This two-day event includes a sidewalk sale from 11 am to 7 pm on Saturday and Sunday, and a street festival Sunday from 1-7 pm.

Gary Gordon, coordinating producer of Summer SOULstice, has been working on the event since it first began in 2001.

“I have a background in playing in bands and producing events, so I was an obvious choice,” Gordon said. “My job began as figuring out who the bands were and making sure there was a crew, but as the event became larger and more sophisticated, more responsibility fell to me.”

Summer SOULstice was initially developed as a way to keep farmer’s market goers on Main Street for a longer amount of time.

To achieve this goal, Gordon believed the key to success was live music.

“The answer seemed to me to be having music at different locations,” he said.

Gordon said in the early years of the event the majority of the music took place indoors, with only one outdoor stage reserved. Even though the first event was much smaller than it currently is, it was successful enough for coordinators to give it another try the following year. The second attempt attracted a larger crowd, while also featuring bands in an outdoor stage.

Although this year’s Summer SOULstice event is anticipating fewer people than last year, the event will still boast a crowd of 5000 to 12,000 people.

The event attracts a wide variety of people, including both Santa Monica residents and residents from the greater Los Angeles area.

“It’s a real mix of people because music appeals to everyone,” Gordon said. “We have people from Santa Monica and some from outside the city as well.”

“Each band will play a couple of sets, so people can hear more than one band play,” Gordon said.

Gordon said the process of getting the various bands on board for the event was a combination of finding out who the sponsors wanted to see perform and also seeing what bands were available.

As there is no central stage, one of the goals of the event is to get people to explore all that Main Street has to offer.

“The event is about promoting Main Street, but it’s also about having a good time, and to have a fun community event,” Gordon said.

Just one block from the beach, Main Street is a unique and eclectic collection of restaurants, boutiques, cafes, and various services.