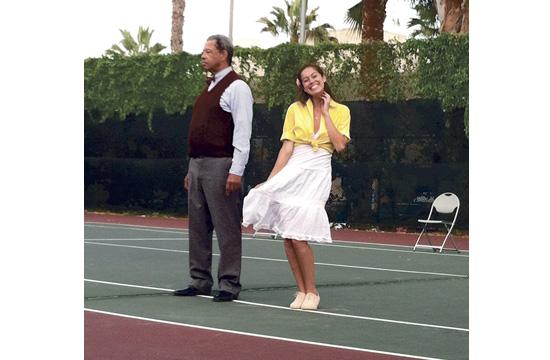 The production of this comedic Shakespeare shows return tonight to the main tennis court at Reed Memorial Park – the same venue since 2004.

Admission is always a suggested donation of $20 or “pay what you can.” Children and teens aged 16 or younger are free.

Known for offering top-notch Shakespeare productions, Shakespeare Santa Monica is true to the language and has audience friendly adaptations.

The company is composed of aspiring student artists and professional actors unified by their commitment to lifelong training in the classics.

Every year the handpicked company of students and professionals train together for weeks before they pick up their scripts for the new season.

Director John Farmanesh-Bocca said the company believes Shakespeare is most successful when it becomes a part of the fabric of the community.

“Accessibility will ensure that future generations have the opportunity to experience the poetry, power and timelessness of Shakespeare’s theatrical work,” Farmanesh-Bocca said.

“The Taming of the Shrew” is Shakespeare’s infamous courting, wedding, and aligning of the scrappy, rowdy, notorious couple Kate and Petruchio, and manages to lampoon chauvinistic behavior while simultaneously reaffirming its social validity.

The play celebrates the quick wit and fiery spirit of its heroine even while reveling in her humiliation. The adaption is set in a rockabilly world full of Johnny Cash tunes and riotous fun.

Performed on a tournament style tennis court, this interpretation of a classic Shakespeare comedy will give audiences exactly what they want from outdoor summer Shakespeare: physical comedy, inclusion, and full-cast dance romps.

Having given more than 1500 youth complimentary tickets to area organizations, Shakespeare Santa Monica continues to educate and enrich through the medium and magic of Shakespeare every summer.

One of the primary functions of Shakespeare Santa Monica is as a summer professional training intensive in classical theatre acting, with teachers and directors from some of the finest arts institutions in the nation.

The focus is on elevating the actors’ all around ‘game,’ so that they approach classical text, as well as all other work, with greater specificity, clarity, inspiration, and daring.

Reed Memorial Park is located at the corner of 7th Street and Wilshire Boulevard, Santa Monica. Tickets can also be purchased at the door.

Organizers encourage guests to bring picnics to the shows.