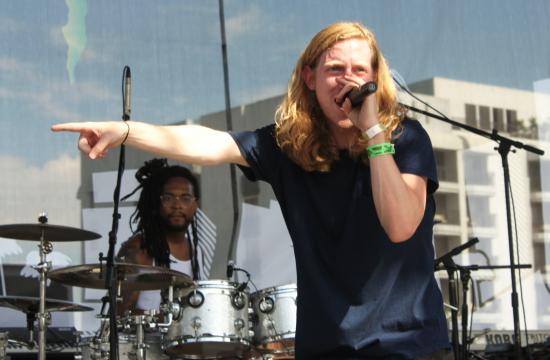 The Sunset Strip Music Festival rocked the Sunset Strip on Saturday with a focus on hip hop throughout the eight-hour street festival in West Hollywood.

Now in its 6th year, the festival featured headliner Linkin Park on the main stage at 9:30 pm as crowds packed the closure area on Sunset between San Vicente and Doheny.

But when the gates opened at 3 pm, there was plenty of action on the east and west stages, as well as the new addition of the Viper Room stage in the beer garden.

Nic Adler, festival co-producer and owner of The Roxy, said one of the festival’s goals was to celebrate the strip’s past while being current and featuring the biggest bands possible.

Other big name bands on the bill included Black Rebel Motorcycle Club and Awolnation on the main stage at 6 pm and 7:30 pm respectively.

Adler said there was a larger presence of hip hop performers this year.

“Growing up in the 90s, I was one of those hip hop kids,” he said. “This year we are having Warren G, Masta Ace, Wale, Logic, and Asher Roth. I’ve always associated myself with seeing a lot of hip hop on the strip. It’s not something you automatically think about, but we have had every single hip hop performer come through the strip. If you look at Kendrick Lamar or J Cole, all those guys did all their early shows on the strip. The strip has this unknown history with hip hop, and I think we’re really celebrating that this year with a whole stage for hip hop, plus a lot of hip hop at The Roxy.”

The festival also partnered with Ethos Gallery on Melrose Avenue which curated all the festival’s art.

“They go in and help with housing, rebuilding, and clean water when there are disasters,” he said. “They’re putting on an ongoing soccer game throughout the day. That’s something we haven’t done before.”