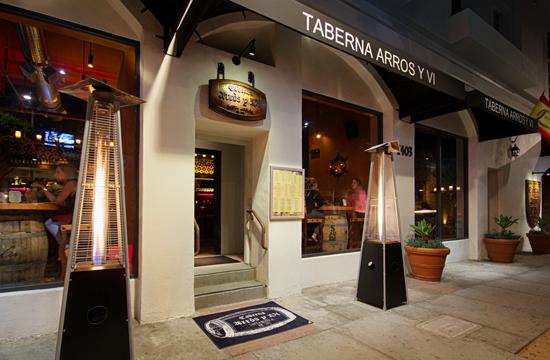 The restaurant opened June 12 in the spot formerly occupied by Tudor House for the past 50 years.

Cardenas said he took over the space last August and spent the first half of this year renovating the 3,300 square foot space.

He said he set out to create a neighborhood friendly restaurant that was price conscious.

“It’s our take on Spanish food,” Cardenas said. “It’s not authentic Spanish cuisines – that’s not what we’re trying to do. We’re here to give a twist on Spanish cuisine, which is about good quality ingredients, and most importantly, it’s about the passion, personality, and professionalism. We are about great ingredients and personal service at an affordable price point that will gravitate to our neighbors. We’re not about fine dining where it’s $100 a head. We’re a neighborhood Spanish joint.”

Currently the restaurant is open seven nights a week, but Cardenas said he hoped to open for lunch daily in the lead up to Labor Day, to coincide with the launch of their full liquor license.

Right now Taberna is only permitted to serve beer and wine, but there are a variety of sangria cocktails.

At the helm in the kitchen is Verite Mazzola, who has previously worked at Palomino in Westwood and Ford’s Filling Station in Culver City.

Cardenas said he brought on Mazzola for her strong farm-to-table background.

“She comes from a very humble background, meaning she’s all about fresh ingredients and embracing the farmers’ markets,” he said. “We have great markets on Wednesdays and Saturdays in Santa Monica and she loves picking up fresh produce because we do everything from scratch. Her approach to farm fresh ingredients and farmer market mentality was something that stood above the rest.”

He said the restaurant has just one small freezer.

“We take pride in saying that,” he said. “It shows that everything is created with a farm-to-table mentality with a Spanish twist.”

An example of one of the Spanish dishes with a twist is the Squid Ink Pasta.

Cardenas said it is a traditional dish from the Spanish town of Valencia that arrives on the plate completely black.

“We sauté some prawns and calamari and put it in with this black squid ink fideua and this vermicelli pasta,” he said. “It’s a grain pasta and we add garlic to the squid ink. It’s not a pretty thing to eat, but the fact is that it’s very flavorful.”

The Paella Valenciana is another hit on the entrée list with chorizo, chicken, lima beans, saffron, and lemon.

When asked about the name Taberna Arros y Ví, Cardenas said Taberna’s are like pubs and casual watering holes they have in Spain.

“They are part gastropub, part restaurant, and part neighborhood joint that allows the destination diners or the neighbors to come in causally to enjoy a happy hour drink with some quality tapas or Hamburguesa or paella is part beachy sophistication and sexy cool… remember the heart and soul of Spain is ‘rice and wine’ so at Taberna we pay tribute to the dining culture of Spain with farm fresh ingredients and delicious wines of the variousregions,” he said. “Taberna Arros y Ví is our take and interpretation on modern Spanish Cuisine done with traditional ingredients and passion to service.”

There’s a glass of red, white, sangria, and beer for $4 and more than half a dozen discounted tapas items.

The restaurant is located at 1403 2nd Street, Santa Monica.