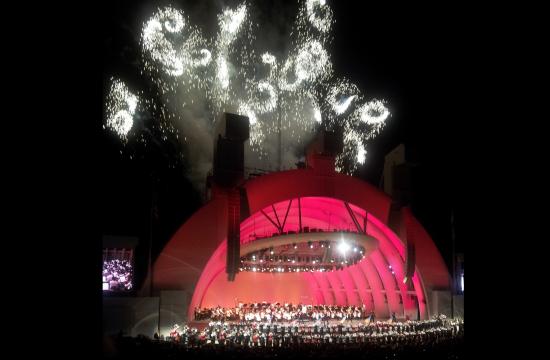 Conductor Robert Moody said it was honor to join the more than 13,000 attendees Saturday evening at the iconic location.

“If you didn’t know, you are at the Tchaikovsky Spectacular, a beloved tradition of the Hollywood Bowl that goes back many decades,” Moody joked. “It’s great to be a part of it.”

The first half of the concert focused on some of Tchaikovsky’s great ballet music and a piece he wrote while on vacation.

Moody spoke to the bowl attendees about the opening piece Swan Lake.

“You are going to hear the opening scene, then the dance of the swans, then finally the waltz from Swan Lake,” he said. “After that we are going to move on to Capriccio Italien. In 1879 Tchaikovsky took a wonderful vacation to Italy and wrote this piece in 1880 based on that trip. While he was there in Italy he was staying in a bed and breakfast right near a military installation and he would hear the Italian army band as they would march and parade every morning. He was fascinated by that sound and he captured it in the Capriccio Italien. You will hear this happening in a wonderful call and response format.”

Shortly before intermission, the brass, drum corps, and color guard of Pacific Crest and Santa Clara Vanguard performed in a drumline-style collaboration.

After intermission, the Philharmonic opened with a work that Tchaikovsky wrote to honor the coronation of Alexander III of Russia.

“You may have recognized the theme you heard in the low brass near the end that comes up later on in the 1812 Overture,” Moody said. “He based that piece on the tune God save the Tsar, a tune that in 19th century Russia they would have known just as well as we know America the Beautiful here.”

He said this was a theme of Tchaikovsky.

“Tchaikovsky used a lot of Russian national themes, Ukrainian themes, and Russian folk songs in his music and actually just about everything we are playing in the second half of the concert includes that,” he said.

The Philharmonic performed sections from Op. 20, Festival Coronation March, and a Ukrainian Folk Song Suite (drawn from the Symphony No. 2) before the culmination of the thrilling 1812 Overture accompanied by cannons and a spectacular fireworks display.