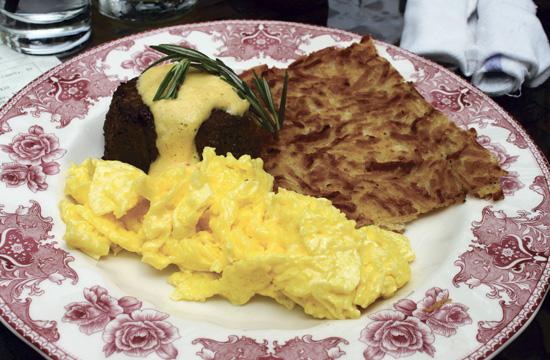 With the Main Street Farmers Market produced in The Victorian’s parking lot each Sunday, the historic venue decided to start a weekly brunch called Sunny Sundays.

It was launched on the second Sunday of June.

General Manager Brad Twigg said the plan was to keep the brunch going year round.

“The brunch is served on the second story of The Victorian on the outdoor patio overlooking the Santa Monica farmers market,” Twigg said. “It’s complete with a ping pong table, Wii, and many bean bags to relax in. DJ Joe Gretto spins lounge mellow grooves.”

He said its brunch mixologist Matthew Biancaniello bought herbs and organic produce from the farmers market every Sunday to use in his cocktail creations.

Chef Walter Sterling said the brunch menu was also inspired from ingredients at the farmers market and local California ranchers.

“We try and take familiar items like pancakes and turn them into extraordinary items like blue corn pancakes,” Sterling said. “Since the time frame of Sunny Sundays pushes into the afternoon we combined true breakfast items with lunch items.”

Sterling said one example was the Brunch Burger Au Cheval.

“The burger is made with fried egg,” he said. “The pork schnitzel also adds an egg.”

Sterling said he tried to have fun with the menu.

“The Red Eye gravy on the ham steak is a meat jus with addition of coffee and chicories,” he said. “The maple bread pudding makes an awesome bun for a sausage sandwich… elements of sweet, savory and the maple syrup component say breakfast sandwich in a whole new way.”

The brunch runs each Sunday from 11 am to 6 pm. Bottomless mimosas are available for $20 per person. Cocktails are priced $10-$12.

Brunch entrees start at $14 (Blue Corn Pancakes and the Chilaquilles) to $25 (steak and eggs).

Among the most popular items is the Breakfast Schnitzel served with two eggs, hash browns, and brown gravy. Another is the Smoked Salmon and Potato Pancakes served with a poached egg, chives, and hollandaise sauce.

The Victorian’s Sunday happy hour starts at 5 pm and runs all night long.

Twigg said reggae bands play in the basement every Sunday night until late.

The Victorian is located at 2640 Main Street, Santa Monica.