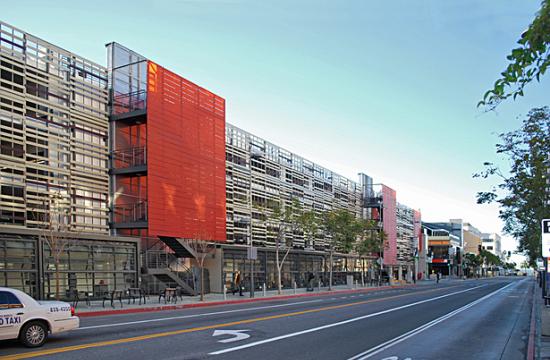 An elderly man and a young woman were rushed to hospital Friday lunch time after a female motorist inside Santa Monica’s Parking Structure 7 accidentally hit her accelerator instead of her brakes, pinning the pair against an elevator and adjacent wall.

He said the initial investigation revealed that the driver of the vehicle, an adult female, entered the parking structure, using the Broadway entrance and pulled just past the ticket booth.

“As she stopped and attempted to reach back to retrieve a ticket, her foot came off the brake, causing the vehicle to roll forward,” Lt. Lewis said. “The driver tried to reapply the brake and depressed the accelerator instead, accelerating into the parking garage towards a ground floor elevator. The victims were standing in front of the elevator with other family members and were not able to move before being struck by the oncoming vehicle.”

Lewis said both victims, one male 67 years old and one female, 24 years old, suffered critical injuries to their legs after being pinned against the elevator and adjacent wall.

He said the female victim also suffered a head injury.

“Both were transported to a local trauma center to be treated for their injuries,” Lewis said. “The driver is cooperating with the investigation and also suffered moderate injuries as a result of the collision.”