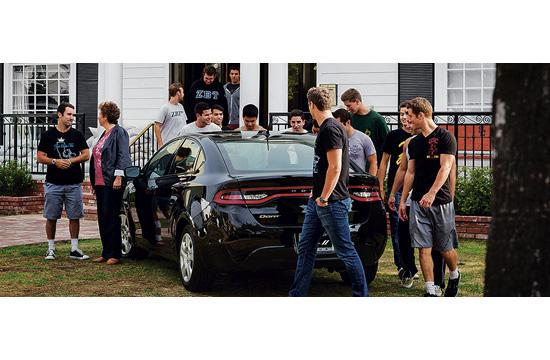 Meals on Wheels West in Santa Monica has found themselves in possession of a brand new Dodge Dart, thanks to the charitable efforts of the Alpha Delta Chapter of the Zeta Beta Tau (ZBT) fraternity of University of Southern California.

The ZBT participants successfully crowd funded a brand new 2013 Dodge Dart through the “Dodge Dart Registry,” an online program that provides a creative way to raise money for the purchase of a new Dodge Dart.

The ZBT fraternity, which participates in a community service project every year, decided to participate in the “Dodge Dart Registry” after learning about both the registry program and how Meals on Wheels West would benefit from a car.

Meals on Wheels West, which has been a certified nutrition program since 1999, is dedicated to nourishing and enriching the lives of the home bound by providing healthy meals and services that promote respect and independent living.

The organization’s vision is to eliminate hunger and to foster independence through home delivery of meals across Santa Monica, Pacific Palisades, Topanga, and Malibu.

Kelfer’s said it was one of his roles to head the fraternity’s philanthropic and community service efforts.

After a friend told him about an opportunity to participate in the Dodge Dart Registry, Kelfer knew this was the project he wanted to pursue.

“I jump at the idea for new philanthropic opportunities,” Kelfer said. “I learned more about the registry and we decided as an executive board that this was a project that would benefit Meals on Wheels West and would benefit the Greek community at USC.”

He said the decision to donate the car to Meals on Wheels West was an easy one for ZBT.

“We looked into the organization and we thought it was perfect because we knew they would definitely benefit from a car,” Kelfer said.

The Dodge Dart Registry allows participants to set the amount of funding they would like to raise for a new Dart, which can be anywhere from a down payment to the full price of the vehicle, and allows for different people to sponsor specific vehicle parts.

The registry itemizes various components of the car, such as a steering wheel, a shifter, a seat or an engine, which allows for community members and supporters to sponsor specific parts.

RocketHub, a crowd-funding platform that makes raising funds quick and simple, is responsible for powering the registry.

Kelfer said the entire process took three and a half months.

“Once we heard about the program, we had to create our registry and write something up about why were doing this,” he said. “Once that was set and it was established that we would be doing this for Meals on Wheels West, we had to figure out a way to raise the money.”

MOWW Director of Community Relations Ellen Rabin said she was quite impressed with the efforts of the ZBT fraternity.

“The process began in February and by April 4 they had raised $10,000,” Rabin said. “The fact that they are in college, but still had the idea to give back to the community, is very impressive.”

Rabin said ZBT was able to reach out to the whole community.

“They were able to get donations from 385 people, which allowed them to meet their goal,” she said.

Aside from being credited with raising $18,000 for a noble cause, the ZBT fraternity is also credited with being the second group to have successfully funded a Dodge Dart through the Dodge Dart Registry.

The registry, which launched in January, has nearly 7,000 registries that have been created to date.

“A lot of people doubted us at the beginning,” Kelfer said. “We wouldn’t have taken on this project if we didn’t think we could complete it. We believe in our fraternity and we knew we were going to reach our goal.”

To learn more about Meals on Wheels West and the “Dodge Dart Registry” visit mealsonwheelswest.org and DodgeDartRegistry.com.