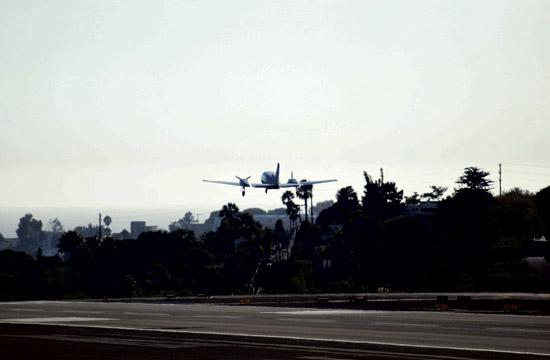 Aircraft operations have slightly decreased at Santa Monica Airport (SMO), based upon an annual report submitted Monday to the Airport Commission.

Just the same, the airport continues to operate below federally regulated noise levels and keep arrivals during the voluntary night curfew to a minimum.

Also speaking to commissioners about how noise is measured and perceived was Vicente Mestre, an engineer with Landrum and Brown.

According to statistics published in the report, SMO experienced a seven percent decrease in the total number of aircraft operations between 2011 and 2012.

The 102,675 aircraft operations are the lowest number in the past 10 years.

While SMO arrivals are permitted 24 hours per day, the airport has a Voluntary Night Arrival Curfew in place.

Under the voluntary curfew, pilots are asked to not arrive at SMO between 11 pm and 7 am weekdays and 11 pm and 8 am weekends and holidays.

Since 2003, the highest number of arrivals during the Voluntary Night Arrival Curfew was 529, which was logged in 2004.

Last year, 80 of the curfew arrivals occurred during the 11 pm hour, while another 76 were recorded during the 6 am hour.

A majority of arrivals during the night curfew were propeller aircraft, including single-engine, multi-engine, and turbo-props.

About 90 percent of the noise violations — or 139 aircraft — were let off with a warning last year; 13 aircraft were fined $2,000 for, and three aircraft were banned.

Makrides told commissioners any bans imposed on aircraft are permanent.

In response to Airport Commission vice-chair Peter Donald’s question of whether studies have been done on the neurological and psychological effects of noise, Mestre said reports were compiled on the cardiovascular effects of noise but nothing more.

Mestre added there have also been studies of the effects of airplane noise in the classroom.

Airport Commission Chair David Goddard asked Mestre if the City’s noise ordinance were applied to SMO, how the airport would be affected.

Mestre replied the noise ordinance could have an impact on nighttime noise.

Also discussed was the residential insulation program, the lack of application of the Airport Noise Capacity Act (ANCA) to SMO, and ways to balance community concern of air traffic and safety with fair access to the airport.