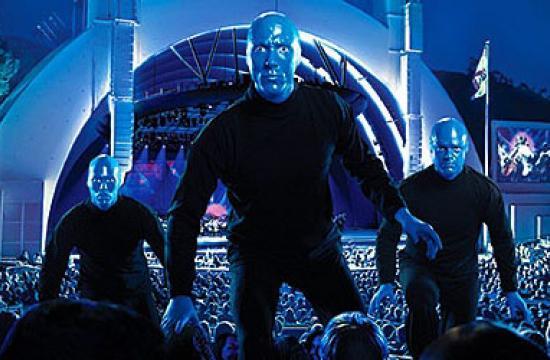 The Blue Man Group performed at the Hollywood Bowl Friday and Saturday nights, wowing audiences with their experimental music, comedy, and multimedia acts.

The night also saw the debut of three original compositions from the minds of Blue Man Group, arranged specifically and performed live by the Hollywood Bowl Orchestra.

Principal guest conductor Thomas Wilkins opened the night with remarks about how the orchestra was delighted to team up with the Blue Man Group.

“We have been waiting for weeks and weeks and months and months talking about this Blue Man Group thing,” Wilkins said. “All of us in this space are anxiously waiting to see what they have brought.”

One of the opening acts began with a voice over in a deep voice as the three blue men took positions center stage behind a PVC pipe contraption.

“Thank you for purchasing orchestral composition for dummies,” the voice over boomed. “Now you can join the list of satisfied customers who have used these guidelines to create orchestral compositions without having to waste years and years at the Colburn School. Before we begin, try this exercise.”

The voice described the steps to composing music like establishing a basic motif, then considering pitch, and creating a melody. As each step was explained, the blue men used paddles to strike the different PVC pipe holes to create drum-like sounds.

The voice over continued: “If you are fortunate enough to be composing for a 100 piece orchestra, you should consider how to fully utilize this powerful resource.”

The orchestra then hit a single note all at the same time, startling the Blue Men so much that they ducked and threw their paddles in the air to the audience’s delight.

“It might not be a good idea to bring in all instruments at once,” the voice over explained.

One of the highlights of the night was the Blue Man Group’s famed “Medley routine.” One of the Blue Men held a straight PVC pipe that was curved at one end while another of the Blue Men started drumming on one end. As one end of the pipe was extendable, the Blue Men then changed the length of the pipes to create different sounds. A third Blue Man joined in the act by adding another pipe, again giving another set of unique sounds.

There was plenty of comedy throughout the show with constant “laugh out loud” moments. In one act the Blue Men placed conductor Wilkins in a large wooden box so they could take over conducting the orchestra.

Instead of using a conductor’s batton, the Blue Men pulled out various props that triggered the orchestra into playing classic movie tunes.

A few examples was a toy shark that triggered the “Jaws” theme, a flame for “Chariots of Fire,” a light saber for “Star Wars,” and a cape for “Superman” were among the highlights.

This act continued with one of the Blue Men putting on a white curly wig to portray Beethoven as he conducted the orchestra on his own.

This Blue Men released Wilkins from the wooden box when they lost control of an opera singer. Wilkins marched to center stage, silencing the orchestra and then walked over and shut the mouth of the opera singer who was in the middle of holding an extremely long note.

Wilkins was a joy to watch as he continued with his playful and interactive role with the Blue Men throughout the entire show. At one point after intermission, he was taken out back, covered in blue paint, tied by rope to a huge crane in the parking lot directly behind the Bowl stage, lifted so the bowl audience could see him dangle, before cameras filmed him as he was “dropped” onto a large inflatable blow up landing pad.

Although it was a stunt-double, the reaction from the audience was utter delight.

Each evening concluded with a spectacular set of fireworks, which included the illumination of the outlines of the three Blue Men high above the Bowl stage.