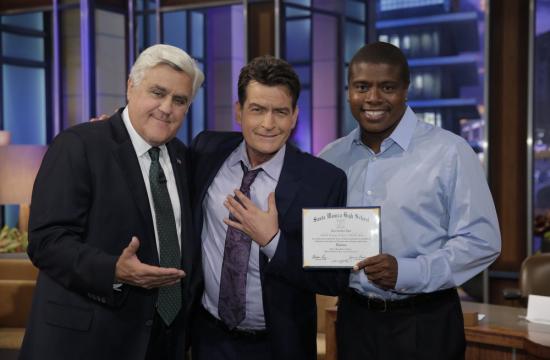 Charlie Sheen was presented with a belated Santa Monica High School diploma on Wednesday’s “The Tonight Show With Jay Leno.”

“The last time I saw you was a while ago last time you were,” Leno said in his interview with Sheen. “You talked to me and you mentioned the fact that you didn’t finish high school. Tell the story.”

Sheen said it was true, saying he never graduated.

Sheen said he was supposed to accept the diploma at this year’s Santa Monica High School graduation ceremony on June 7.

“I was going to go to the ceremony and there was that horrible shooting at Santa Monica College and I guess it wasn’t meant to happen,” Sheen said. “It was at the 100 year anniversary (ceremony).”

“So you didn’t get to go?”  Leno quipped on last night’s episode.

“So you never got your diploma?” Leno asked.

“I got something for you!” Leno exclaimed.

“You can’t go to Kinkos and get this,” Todd joked. “It says it certifies that Charles Estévez “aka Charlie Sheen” (graduated from) Santa Monica High School, class of 1983 and class of 2013. It is my honor as your friend of over 30 years to present you with your official high school diploma.”