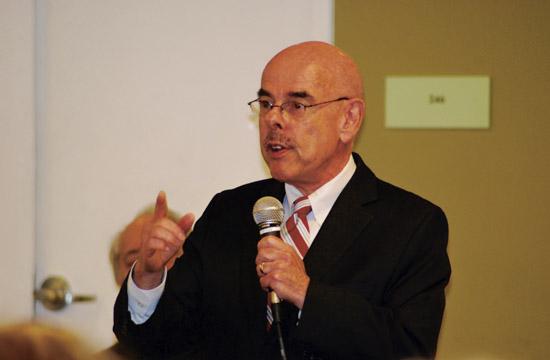 Despite the respective issues impacting a national electorate, Santa Monica is still affected by the likes of Obamacare and gun control.

Waxman visited Santa Monica on Wednesday on the heels of recent threats of a government shutdown in Washington,D.C.

During his 30-minute speech to more than 100 people inside a packed community room at the Santa Monica Public Library’s Main Branch,Waxman discussed Obamacare, sequestration, redistricting, whether the debt ceiling needs to be raised, food stamps, the Keystone Pipeline, climate change, Syria, and his stance on gun control in light of the June 7 shootings at Santa Monica College.

At the outset of his address to the Santa Monica Democratic Club’s members and supporters, Waxman wasted no time diving right into Obamacare.

“(The Republicans) want to put it off for a year and make it better,” Waxman said about House Republicans who proposed defunding Obamacare.

“This has not been the way they’ve conducted themselves when it comes to legislation to give people healthcare. Why should we put off a year for people who are waiting desperately for health insurance.”

Waxman also discussed how the Tea Party has impacted the Republican contingency in the House of Representatives.

“The responsible Republican Party – which has been a worthy adversary in the two-party system – has been taken over … by very extreme Tea Party people,” Waxman said. “Senator (John) McCain is shaking his head. Republican senators don’t want the party label destroyed by having them close down the government.”

A key issue with House Republicans, Waxman said, is some Representatives are only concerned about their respective districts.

“They have districts they have achieved through gerrymandering that are so safe Republican, their only concern is to make sure they can win the Republican nomination. They don’t care about Democrats in the November election, they just want to win their primary,” Waxman said.

“The result of that is they don’t care what happens to their party. They only care about themselves.”

“Not raising the debt ceiling jeopardizes the full faith and credit of the United States,” Waxman said. “We have everybody around the world look to us as the solid investment; they can always trust the finances of the U.S. government. But the consequences are, if we default, … (creditors) will insist that any money we borrow in the future has to have a risk premium. We will have to pay more because we will not be as credit worthy as we’ve been in the past.”

Moving on from the debt ceiling, Waxman briefly mentioned he hopes food stamps are not eliminated and spent a couple minutes discussing the proposed Keystone Pipeline to bring crude oil in from the Canadian province of Alberta and into the United States.

The final issue broached during Waxman’s presentation was Syria.

“The president really shocked everybody with his proposal (of military action in Syria),” Waxman said.

Waxman briefly explained how Syrian leader Bashar al-Assad has reportedly used chemical weapons on his own citizens. If the reports were true, the use of chemical weapons – which Waxman said are considered weapons of mass destruction – would be a violation of international laws.

“In Syria, they’re having a civil war. They’re fighting against Assad,” Waxman explained. “Assad is a really bad guy. He’s used weapons he’s had at his disposal to kill his own people.”

In light of Assad’s reported actions, Waxman said President Barack Obama pledged “to do something about it” before turning to Congress for a resolution.

“It’s a mess.The real question is: how far do you go,”Waxman told the standing room only crowd. “If you start using any kind of military, what do you accomplish?”

Adding there was “enormous opposition” to Obama’s plans,Waxman said he was torn about his stance on the issue.

“If Congress rejected (Obama’s plans), what message does that send to Iran as developing nuclear weapons of mass destruction,” Waxman pondered.“On the other hand, if you take a step, you have to figure out where you are going with that step.”

Waxman said he finally took a position of advocating military action only after all other forms of negotiation and amelioration have been exhausted.

“There are a number of things you can still do,” Waxman said, hopeful a peaceful resolution could be reached with the Syrians.

After discussing Syria, Waxman participated in a question-and-answer session.

Some of the questions he faced included the future of Santa Monica Airport, whether assault weapons would ever be banned, and the development of the Trans-Pacific Partnership Agreement.