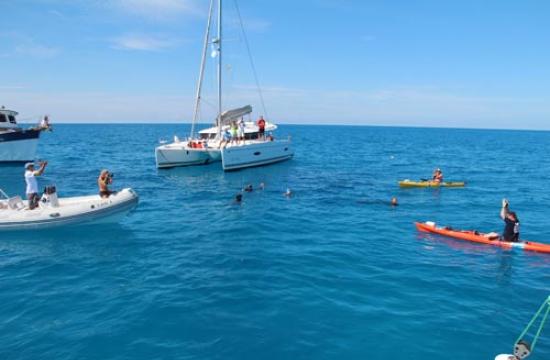 Long-distance swimmer Diana Nyad, a sports journalist and regular commentator on KCRW radio in Santa Monica, completed her pursuit of a record swim from Havana, Cuba to Florida.

At approximately 49 hours and 40 minutes into the swim with two miles to go, Diana called all five boats together in a circle around her and treaded water.

“Hi everybody,” she is quoted saying on her blog, apologizing first for any lack of clarity in her articulation. “I have some bad abrasions in my mouth from the jellyfish mask, so excuse me if I have trouble talking.”

And then she proceeded to have no trouble talking.

“I am about to swim my last two miles in the ocean,” she said. “This is a lifelong dream of mine and I’m very very glad to be with you. Some on the team are the most intimate friends of my life and some of you I’ve just met. But I’ll tell you something, you’re a special group. You pulled through; you are pros and have a great heart. So let’s get going so we can have a whopping party.”