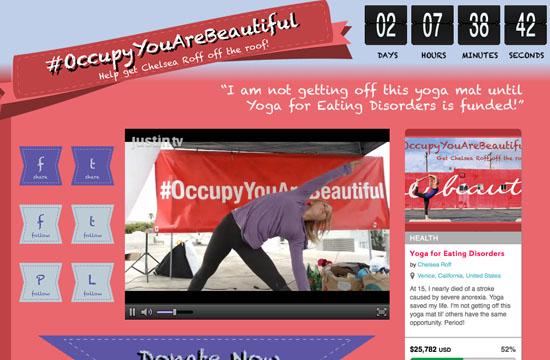 After setting down her yoga mat Sunday at 8 am, she said she refuses to get down until her Indiegogo campaign Yoga For Eating Disorders is funded — a total of $50,000.

Her goal is to help other women find their way out of this illness — just like her community helped her in her time of need. She has partnered with the Give Back Yoga Foundation to offer Yoga for Eating Disorders™ as a service at treatment centers and to conduct an evidence-based study on its effectiveness in improving treatment outcomes.

She said she is taking a stand “for joy, for freedom, and for the belief that all people have the right to feel beautiful in the bodies they inhabit.”

She said the demonstration would see an array of free events being held including yoga and meditation classes, interviews, live music, and more.

She said there is an open invitation for the public to join her on the rooftop, or follow along online.

The first day of #OccupyYouAreBeautiful saw contributions from a host of well-known teachers and speakers in the world of yoga, meditation, and healthy living.

For more information or to see the live stream, visit www.occupyyouarebeautiful.com.