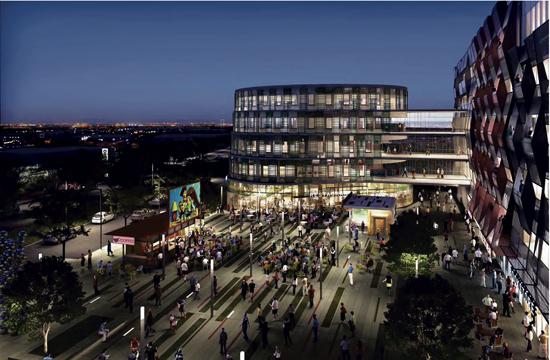 A development agreement (DA) proposing to bring 471 rental housing units and as much as 375,000 square feet of creative office space to Bergamot Station and the Transit Village Center at 1681 26 Street has been deliberated by Santa Monica’s planning commissioners for the past two weeks.

The consideration of the potential DA, proposed by Hines/26th Street LLC (Hines), at the Planning Commission at their Sept. 11 and 18 meetings coincided with the City Council green lighting the Bergamot Area Plan Sept. 10.

Hines presented its plans to commissioners Sept. 11, proposing a development “setting the standard for a sustainable future” and would feature a combination of five residential and creative office buildings, four acres of open space, two acres of parks, paseos, and plazas, two acres of streets and sidewalks, and a 31,675-square foot public plaza.

According to the Hines Power Point presentation, there would be 498 total residential units spread across three buildings, with 471 of those units available for rent. The other 27 units would be reserved for 27 artist live/work spaces.

Hines estimates about 40 percent of the units would be either two or three bedrooms, which City Hall believes will bring in more families and limit the number of transient occupants.

As many as 90 units would be ground level and have a direct entry.

The proposed project’s floor-area ratio, or FAR, is currently at 2.47, according to the Hines Power Point presentation.

Some incentives offered to those who would live or work at the proposed Hines project include: residential transit pass subsidy; commercial parking cash payout; van pool subsidies; bike share contribution; reserved spaces for carpoolers and car shares; and, pedestrian wayfinding, among others.

Financially, the Hines project, if realized in its current iteration, may result in $106 million in community benefits over the course of 55 years, including annual contributions of $200,000 for childcare, $25,000 for bike share, $15,000 for transportation management, and $5,000 for historic preservation.

The Hines team also proposed a few one-time community benefits, such as constructing streets, sidewalks, and signals, contributing $2 million for the Expo Buffer, and directing $160,000 to the Big Blue Bus. Another $75,000 would be doled out for historic preservation.

During construction, the Hines team assured they would institute a local hiring program. The development proposes to be LEED Gold Certified.

In all, the Hines team estimates the proposed project would have a net fiscal impact of $25 million to the City’s General Fund over the life of the project.

The Hines team did acknowledge in its presentation a few remaining “open items,” such as the “affordability level” of the 50 affordable housing units, how the proposed parking cash out program would be applied to parking not subsidized by employers, how flexible sustainability standards would be in order to allow for technology advances, and the “construction of additional affordable units on-site in lieu of payment of a commercial affordable housing linkage fee.”

In addition to outlining all the relevant statistics of the proposed DA, the Hines presentation also included several renderings of how the development would look like if it were built.

Beyond the project’s plans, planning commissioners were also presented with the Final Environmental Impact Report (FEIR).

City staff’s presentation and the response of commissioners to Hines’ DA request will be covered in next week’s issue of The Mirror.