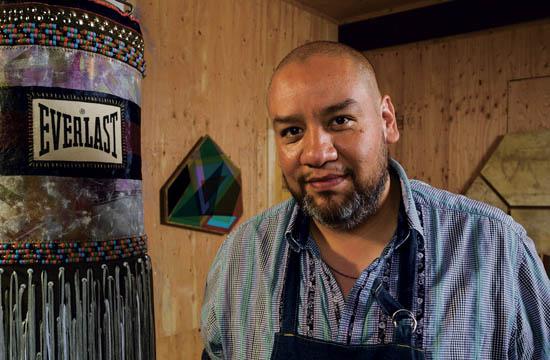 Shoshana Wayne Gallery this Saturday opens a solo show of new work by Jeffrey Gibson. This is Gibson’s first show with the gallery that will run Sept. 7 through Oct. 19, 2013.

For this exhibition Gibson continues to mine the visual vocabulary that he has been developing over the course of the past decade.

“The Spirits Refuse Without A Body” features several multi panel paintings, a suspended column of painted drums, adorned punching bags, rawhide covered fluorescent lights and a large sculpture based on the travois form – a historical structure used by Native American tribes of the Plains region to pull heavy loads from place to place.

This mash-up of visual and cultural references comes from the artist’s Choctaw and Cherokee heritage, moving frequently during his childhood – to Germany, Korea and the East Coast of the U.S., and his early exposure to rave and club cultures of the 1980s and 1990s.

Gibson cites that the sense of inclusiveness and acceptance, the celebratory melding of subcultures and an idealistic promise of unity all galvanized by the DJ’s power to literally move an audience to dance to his beat, continues to serve as a primary inspiration for his inter-disciplinary practice.

The paintings are done on elk rawhide stretched over wood panels.

Gibson arrived at this format after years of looking at painting techniques found in various non-Western art histories, of paintings on shields, drums, and parfleche containers (animal hides wrapped around varying goods).

The paintings also read within a modern and contemporary art context whereas artists from the 1950s and 1960s were looking towards traditions such as Native American and Oceanic art to create ideals of spirituality, animism and purity.

One can infer artistic influences from Frank Stella, Ellsworth Kelly, and Donald Judd.

In the smaller gallery, Gibson installs several light sculptures which, upon easy translation, read solely as direct references to the work of Dan Flavin.

In actuality, the pieces address the notion of ownership and entitlement, a sensibility the artist envied as a quality of masculine action: being unconcerned with judgement or response. The tubes are phallic and encased in rawhide. Again here, the artist takes an iconic idea, in Flavin’s sculpture and translates it into a sculptural vernacular that is uniquely his own. An uncanny resemblance to glow sticks – ever present in rave culture – also appears in the reading of the work.

Perhaps the title, “The Spirits Refuse Without A Body,” is the most concise explanation of the myriad of concepts and techniques applied within this body of work.

It is taken and reworked from the “Cannibalist Manifesto” by Oswald De Andrade, who highlighted Brazil’s history of metaphorically “cannibalizing” other cultures as its greatest strength.

This notion of taking multilayerd ideas from different histories and cultures and mixing them or sampling from them to create another whole and coherent language is at the core of Gibson’s practice.

Gibson lives and works in Hudson, NY. He is a recipient of the Joan Mitchell Foundation Painters and Sculptors Award, a Creative Capital Grant, and the Eiteljorg Museum Fellowship, among others. He is currently a Visiting Artist at Bard College.