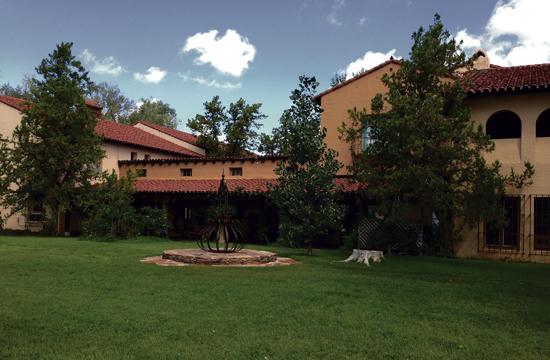 Route 66. La Posada Hotel, Winslow, AZ. Built between the railroad tracks and Route 66, La Posada Hotel was originally built in the late 1920s by the Santa Fe Railroad and the Fred Harvey Company for the people riding the Super Chief on the Chicago-Los Angeles route. Through the good work of Allan Affeldt it has once again become a destination hotel.

In the first half of the 1900s Harvey Company built hotels and restaurants along the routes of the railroads in the western United States. Fred Harvey is credited with being a leader in promoting tourism to the Southwest. Samuel Hopkins Adams’ novel about the Harvey waitresses, “The Harvey Girls,” was made into a film of the same name starring Judy Garland. Her song from that film, “On the Atchison, Topeka and the Santa Fe,” won an Academy Award.

The famed Mary Colter was the architect for La Posada Hotel. Colter designed the hacienda style Spanish Colonial Revival La Posada in 1929. She designed the hotel, the 6-acre gardens, the furniture, the china, even the hotel uniforms. El Posada was listed as a National Historic Landmark in 1987.

Colter may be most widely known as the architect of the 1922 Phantom Ranch buildings at the bottom of the Grand Canyon and the cabins on the rim of the Canyon and Hermit’s Rest.

Colter also worked for the Santa Fe Railroad where she designed the Turquoise Room Dining Car and the now highly collectible Mimbreno china and flatware for the Super Chief Chicago-Los Angeles rail service.

In the 1930s and 40s the Santa Fe Super Chief was the classiest train between Chicago and Los Angeles. The idiom of the day was “I just chiefed in from the Coast.”

One of her last designs was the Streamline Moderne cocktail lounge at Union Station in Los Angeles, which now can be seen on Los Angeles Conservancy tours.

The Santa Fe railroad closed the hotel in 1957 and used the facilities as offices, wrecking havoc on the interior of the building.

Along came Allan Affeldt and Tina Mion. They bought the hotel with the intention of restoring it. “Our friends thought we were crazy,” said Affeldt who calls himself a “serial eccentric entrepreneur.” He is married to Tina Mion, whom Ed Ruscha called the “foremost figurative artist in the Southwest.”

Work on the hotel restoration is ongoing. Also planned are the converting of the old train station to an art museum, planting a vineyard and making wine, a sculpture garden and a potager. James Turrell is designing a “sky space” for La Posada and when Turrell’s Roden Crater opens La Posada will be the embarkation point for visitors.

Allen Affeldt bought La Posada in 1997 and began work on the restoration of the original Colter design. He said, “I believe we save great buildings in the same way we save families, cities and nations: one day at a time, with constant investment and courage, undaunted by naysayers and long odds. I believe in the sacredness of place, and in the power of great architecture to inspire creativity, kindness and civic responsibility.”

You too can “chief in” from the Coast. This time on an Amtrak train. You can still disembark at the front entrance of La Posada and enter the restored hotel and have a great meal at The Turquoise Room, named for the dining room on the Super Chief. The Turquoise Room at La Posada is run by James Beard nominated chef, John Sharpe.

Sharpe is developing a menu of Native American inspired foods such as cornhusk wrapped and baked salmon or locally sourced churro lamb for the squash blossom and lamb sampler platter. Breakfast might be corn polenta with fire roasted tomatoes, fresh spinach poached eggs and corn salsa or waffles and pancakes served with locally produced prickly pear or mesquite syrup. He brings the idea of eating locally and sustainably grown produce and products to the La Posada kitchen.

Each of the 53 rooms in the hotel is named for a famous hotel guest. Presidents Roosevelt and Truman; actors Mary Pickford, Clark Gable, Jimmy Stewart, Gary Cooper; aviators Amelia Earhart and Pancho Barnes; Albert Einstein; all were guests at La Posada.

My thanks to Meaghan McNamee, the bartender at the Martini Lounge at La Posada, for her stories about the hotel. A local resident, the daughter of a Scottish Irish father and a Navajo mother, she calls La Posada “a magical place.”

Martini Anyone? On the Super Chief a martini was 30 cents. Today, at the hotel they are a little more!