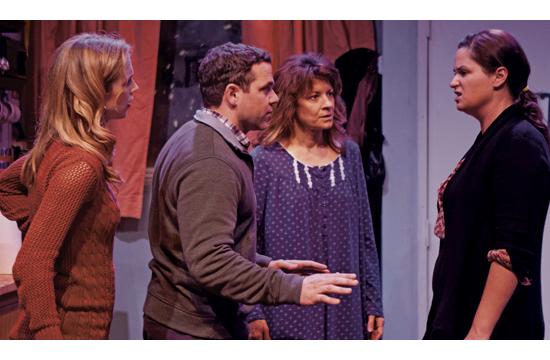 The award-winning Rogue Machine scores again with John Pollono’s world premiere production of “Lost Girls,” a dramedy that explores the embers of a failed marriage as well as the emotional dynamics of a working class family.

With a raging snow blizzard on a cold, windy day in Derry, New Hampshire, the play begins with Maggy (Jennifer Pollono) getting ready to go to work.

Bundled up, she leaves her “blue collar” home, which she shares with her foul-mouth mother Linda (Peggy Dunne) and her rebellious 17-year-old daughter Erica (Anna Theoni DiGiovanni) whom Maggy believes is in school.

Her morning doesn’t start well as she quickly discovers that her Honda has been stolen and thus begins this extremely well written play, skillfully directed by John Perrin Flynn.

Maggy calls her ex-husband Lou (Joshua Bitton), a recovering alcoholic cop who comes to her house to take down the stolen car report.

The tension between Maggy and Lou is visceral and is compounded, in part, due to the presence of Lou’s new wife, Penny (Kirsten Kollender) who is really the most reasonable of the bunch.

To add to the highly charged atmosphere, it turns out that Erica did not show up for school sending Maggy into an emotional tailspin as she congers up all the possible calamities that may have befallen her daughter.

Lou gets a phone call from one of the other police officers who tells him that there’s been a big pile up with some fatalities.

When Maggy hears one of the cars in the crash is a Honda, she becomes convinced that her daughter is dead.

As the drama slowly unfolds, we discover that Erica has run away with her old friend Scooter, played by Jonathan Lipnicki, whom you might remember as that adorable kid in “Jerry Maguire.”

Their friendship soon begins to go in another direction as Scooter confesses he’s been in love with her since the second grade and compares them to “Romeo and Juliet,” to which Erica responds, “That lasted three days and six people died.”

Playwright Pollono has carefully crafted his characters and soon it becomes apparent that all of them harbor guilt for either what they did or didn’t do.

Maggy’s mother spends her time in a bathrobe and curses like a sailor.

Her rough exterior belies her feelings of failure as a parent, which Maggy shares, to some extent, about her own parenting skills.

She is also still furious about the divorce and is hell bent on ripping into Lou for his alcoholic behavior when they were married.

Adding to the “guilt” mix, Erica confesses to Scooter that she has seduced her mother’s boyfriends since she was a young girl.

Lou’s new wife Penny is probably the most reasonable of the “mea culpa” bunch and tries to win Maggy’s acceptance explaining that she didn’t start dating Lou until the divorce was final.

In an intense confrontation between Maggy and Lou, unresolved feelings surface and defenses begin to melt away as old wounds are sliced open and their mutual guilt spills out with a surprising climax.

Lest you get the impression that the play is about a lot of dramatic blood letting, Pollono has peppered his play with many laugh lines that mitigate some of the bubbling anger from Maggy and Linda.

The writing is almost poetic and in some ways reminiscent of some of the works of Eugene O’Neill who so beautifully wrote about the family dynamic, sans the “potty mouths” as spoken especially by Maggy and Linda.

Given the limitations of the small space, the production values are modest but highly functional beginning with David Mauer’s Scenic Design, Jeff McLaughlin’s Lighting Design, Peter Bayne’s Sound Design, Caitlin Doolittle’s Costume Design, and Corwin Evans’ Video Design which flooded the stage with snow flurries allowing the actors to change the set from the living room to the motel room without stumbling around in the dark and avoiding leaving the audience in multiple black outs.

Director Flynn has put together a flawless, extremely talented ensemble, each of whom delivers a riveting, fully actualized, sub-textual performance, fully servicing the material, thus creating a compelling evening of theatre.